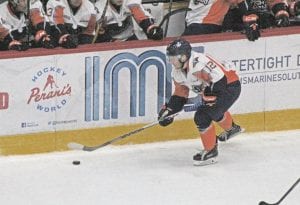 BARRIE, Ont. – The Flint Firebirds capped off a weekend road swing on Saturday with a 3-1 loss to the Barrie Colts at the Barrie Molson Centre. It didn’t take long for Barrie to get on the board as Zachary Magwood scored just 6:02 into the game, the only goal of the first period.

Early in the second frame, however, the Firebirds killed off a penalty and Mathieu Henderson passed the puck to Nicholas Caamano at center ice, who was wide open after exiting the penalty box. Caamano skated down and connected on a wrist shot to tie the game.

That would be the only tally for Flint as Jason Willms gave Barrie the lead back a couple of minutes later and Magwood got his second of the night on an empty net goal with four seconds remaining in the contest.

It was a different story the night before as the Firebirds recorded a 3-1 victory at the Sudbury Wolves. The only goal of the first period belonged to Flint as a rebound bounced to Hunter Holmes and his shot would trickle over the goaltender’s pad for the 1-0 lead.

That would be the only goal until midway through the third when Caamano’s pass from the faceoff circle set up a one-timer for Cullen Mercer, who buried it top shelf. Everett Clark would make it 3-0 on an empty net goal from across the ice before Sudbury’s Owen Gilhula broke the shutout with less than 40 seconds remaining.

Thursday night was not kind to the Firebirds whatsoever, as they weren’t able to get any momentum going in the first game of a weekend road trip with a 6-0 loss at the North Bay Battalion.

Brett McKenzie gave North Bay the lead, assisted by Riley Bruce, just six minutes into the game. Later in the period, McKenzie helped set up a goal as he and Zach Poirier assisted on Steve Harland’s goal at the 15:41 mark.

The second period didn’t see much action until the final minute as Justin Brazeau buried one at 18:59 with help from Bruce and Daniel Walker. Daniil Vertiy rippled the mesh only 15 seconds later with assists credited to Brazeau and Kyle Potts.

Early in the third, Brazeau registered one of his own. His tally came at the 2:14 mark with help from Brady Lyle and Adam McMaster. Potts would score the game’s final goal, assisted by Vertiy.

Flint remains in fourth place in the West Division and eighth in the Western Conference at 15-14-0-2 for 32 points. Flint traveled to the Saginaw Spirit on Wednesday, following VIEW deadlines, and the Sarnia Sting today before the Holiday break takes place.