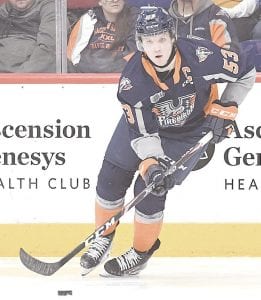 Flint’s Ty Dellandrea looks to move the puck against the Saginaw Spirit earlier this season. Photo by Todd Boone/Flint Firebirds

FLINT — The longest winning streak in Flint Firebirds’ history has come to an end at 15 after a 4-1 loss to the Kitchener Rangers at the Dort Federal Event Center on Saturday.

The Rangers got the only goal of the first period at 15:19.

Kitchener doubled its lead early in the second, but Ty Dellandrea scored Flint’s only goal of the night on the power play.

The Rangers scored twice in the third to close it out.

The streak stretched to 15 wins with a 6-3 victory at the Mississauga Steelheads on Friday.

Riley McCourt scored on the power play at 6:45 of the first period to get the scoring started. Tyler Tucker added to the advantage with another power-play goal to make it 2-0 after one.

Halfway though the second period, Marcus Gretz scored his first goal of the year, followed by Brennan Othmann’s power-play tally to push the lead to 4-0. Mississauga scored late in the frame.

The Steelheads scored twice in the third, which Jack Wismer answered with an insurance goal, as well an empty-netter.

The Firebirds have now clinched a playoff spot and are currently fourth in the Western Conference at 37-18-1-1 for 76 points. They are at Sarnia on Wednesday, host Hamilton on Friday and welcome Kingston on Saturday.