Firebirds 2-1 so far in preseason play 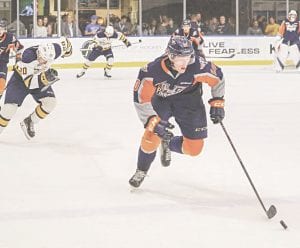 The Flint Firebirds started off the preseason with two consecutive wins. Photo provided

BUFFALO, NY — Sunday saw the Flint Firebirds lose their first game of the preseason at the annual OHL Showcase at the Harbor Center in Buffalo in a 7-4 defeat to the Windsor Spitfires. Flint’s Jack Wismer got the first goal of the night just 1:01 into the game before Windsor went on a huge tear.

Lev Starikov, Curtis Douglas and Kyle McDonald all notched tallies for Windsor in the first period before Flint came storming back. A pair of CJ Clarke goals tied it up heading into the middle frame. The second period was not friendly to Flint, as Will Cuylle and Jean-Luc Foudy put the Spitfires up by two.

Luke Kutkevicius and Starikov made it a four-goal lead, which made Flint’s final goal by Eric Uba simply cosmetic.

The preseason has started off on the right foot for the Firebirds, going 2-0 in their first two contests. It took two shorthanded goals, but Flint climbed out of a two-goal hole to top the Erie Otters, 4-3.

Erie notched the only goal of the first period with only 11 seconds remaining from Hayden Fowler. Flint answered with a Jake Durham tally in the middle stanza, which Erie countered with a Chad Yetman goal in the second and an Alex Gritz goal early in the third.

After that, Flint flipped its fortunes, beginning with a short-handed tally from Hunter Holmes. Just two minutes later, Ethan Keppen buried one, also on the penalty kill. With less than two minutes remaining, Connor Roberts netted the game-winner to put Flint at 2-0.

During Friday’s game against the Hamilton Bulldogs, Flint scored early and often, starting just 1:03 into the game when Roberts rippled the mesh. Clarke buried one later in the frame, but Hamilton responded later in the frame to make it 2-1 after one.

Flint wraps up the preseason with a pair of games against the Saginaw Spirit on Sept. 14 at Iceland Arena and Sept. 15 in Saginaw.