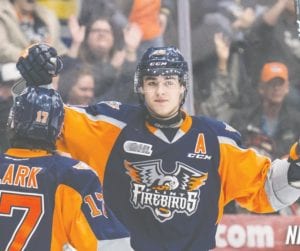 Nicholas Caamano is now playing for the Dallas Stars’ affiliate, the Texas Stars.

FLINT – A critical year in which the Flint Firebirds of the OHL were able to turn the organization around and make the playoffs for the first time has really benefited the team and its players, but they aren’t done yet. There has been no shortage of activity since the Firebirds were eliminated in the first round of the playoffs by the Sault Ste. Marie Greyhounds.

Several of Firebirds are currently getting their shot at professional hockey. Defenseman Mathieu Henderson signed a deal to play for the South Carolina Stingrays, the East Coast Hockey League affiliate of the Washington Capitals. He joined the team in time for their game at the Atlanta Gladiators on April 5.

Also getting his shot is Ryan Moore, the Firebirds’ leading scorer this past season. Moore inked a deal to play for the Orlando Solar Bears, the ECHL affiliate of the Toronto Maple Leafs. The 20-year-old Troy native will be a huge asset with his speed and scoring ability.

Nick Caamano signed an Amateur Tryout Agreement with the Dallas Stars and two days later received a three-year entry-level contract. Caamano was assigned to the Stars’ American Hockey League affiliate, the Texas Stars, and got an assist and a plus-one rating in his first pro game.

Defenseman Jalen Smereck, who signed an entry-level deal with the Arizona Coyotes in the offseason, was recently called up to the Coyotes AHL affiliate, the Tucson Roadrunners. The Detroit native, who was huge on the Firebirds’ blueline this year, was in the lineup for this past weekend’s road trip.

Maybe the biggest move general manager George Burnett made this year was acquiring forward Kole Sherwood early in the year. He was the team’s second leading scorer and already had a deal with the Columbus Blue Jackets. The Jackets recently called him up to the AHL to play for their affiliate, the Cleveland Monsters.

Another opportunity popped up for rookie Ty Dellandrea, who was the Firebirds’ first round pick in 2016. Dellandrea was recently invited to the training camp for Canada’s National Men’s Under-18 team in preparation for the 2017 International Ice Hockey Federation World Championships in Slovakia.

The Firebirds also made a trade, sending their second-round pick, 30th overall, and fourth-round pick, 66th overall, to the Mississauga Steelheads for the 23rd overall pick. The move was made to move up a bit to prepare for this past Saturday’s OHL draft.

The Firebirds selected 16 players, highlighted by left wing Ethan Keppen, who Flint selected in the first round, 10th overall. In the second round the Firebirds selected defenseman Marcus Gretz and goaltender Luke Cavallin. Right wing Jeff Burridge came in the third round. Flint made picks across the board, choosing nine forwards, five defensemen and two goalies.

Some of the draft selections immediately made the commute to Flint on Saturday to meet the coaching staff and tour the facilities within the arena.