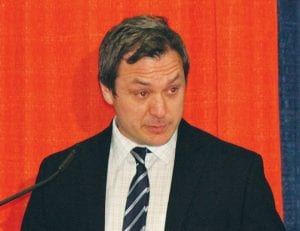 FLINT — After unveiling its identity a week ago, the Flint Firebirds of the Ontario Hockey League called another news conference at Perani Arena on Thursday to make another big announcement — the hiring of their hockey department, most notably the coach and general manager.

“We are continuing to build our OHL organization into something that this community can be very proud of both today and for many years to come,” said IMS Hockey President Costa Papista. “Last week we announced our team name, logo, colors and brand identity and today we’re announcing our hockey department, which is critical to the success of this project.” 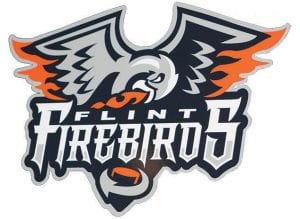 “(Myself and Firebirds’ owner Rolf Nilsen) sat and we talked about purchasing a team and a lot of different situations came about,” said Christensen. “Finally, he said ‘I want a team in the best junior level in the world.’ He’s a guy that does what he sets out to do, and fortunately, he’s been able to realize that dream and purchase a team in the Ontario Hockey League, which I believe is the best junior league in the world.

“It develops more players for the National Hockey League than any other league in the world.”

The Firebirds’ new coach, John Gruden, followed Christensen. Gruden won a gold medal coaching the U.S. National Under-18 team in 2013-14, has won several international tournaments behind the bench and had quite a playing career himself. Gruden was drafted by the Boston Bruins in 1990 and played 92 games in the NHL along with 10 seasons of professional hockey.

“I’m very honored to be the first coach in the Flint Firebirds’ history. It’s going to be a challenge, but I hope it’s a challenge that all of the players are going to be willing to live up to,” said Gruden. “I’d like to thank the USA Hockey Development program. Working there for four years really taught me the importance of development.”

Joe Stefan was welcomed as the Firebirds’ assistant general manager, which is the position he held with the Plymouth Whalers a year ago. He also served several stints with the Whalers as both a scout and a head coach.

The head scout, however, will be Dave McParlan, who has been in the scouting business for 18 years, the last nine of which were with the Whalers.

He also scouted for the Huntsville Tornado of the Central Hockey League and the Madison Kodiaks and Madison Monsters of the United Hockey League, which the Flint Generals were once a part of.

Also in attendance were two of the Whalers’ star players, who will move with the team to Flint in the fall. Defenseman Alex Peters was at the news conference, and although he was hurt this year, is expected to be a major contributor, especially after being drafted by the Dallas Stars in the 2014 draft.

Along with him was goaltender Alex Nedeljkovic, who is widely considered one of the best goalies in the OHL. He will likely be a mainstay in between the pipes for Flint, and once his junior career is over, he will be suiting up for the Carolina Hurricanes, who drafted him in 2014.