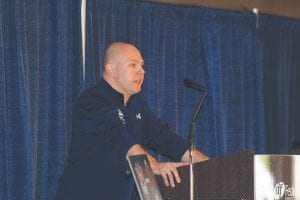 Robert Perani, Jr. speaks about the recent collaboration between the Flint Firebirds and his father’s company, Perani’s Hockey World, on a five-year sponsorship deal that was announced at a press conference at Dort Federal Credit Union Event Center on Thursday.

FLINT — Not long after the Perani name was replaced on the former Perani Arena by Dort Federal Credit Union, the company entered a five-year sponsorship deal with the Ontario Hockey League’s Flint Firebirds to become the team’s presenting sponsor. The news was announced at a press conference at Dort Federal Credit Union Event Center last Thursday.

“I love coming out and being a part of the great announcements here,” said Flint mayor Dayne Walling. “It’s just been incredible watching everyone come together with captain Rolf Nilsen and IMS and all of the effort and energy they’ve brought to revitalizing hockey here in Flint and Genesee County and the entire 1-69 region.”

Flint hockey history was the theme of the press conference, with some of Bob Perani’s memorabilia from the Flint Generals on display in the lobby. He was a member of the first five seasons of the Generals and was the first to have his number retired by the franchise; even in its most recent incarnation. 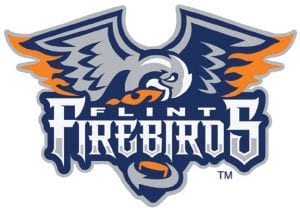 “The Flint Generals; Perani’s Hockey World; Perani Arena; this is all a part of who we’ve been as a community,” added Walling. “We all owe a great deal to the Perani family. I think it’s safe to say that Flint is just not Flint without Perani.”

It was announced later in the press conference that by the time the season arrives, the arena will erect some sort of a memorial for Bob Perani in the arena lobby. There is no word yet, though, on what the memorial may look like or where it will sit in the arena’s lobby.

One of the highlights of the event, however, was listening to a speech from Perani’s son, Robert Perani, Jr.

“First of all, I’d like to thank Mr. Nilsen for bringing the OHL to Flint. I’d also like to thank Costa (Papista) for presenting such an opportunity to Perani’s Hockey World,” said Perani. “But this is more than just a sponsorship; this is a partnership. 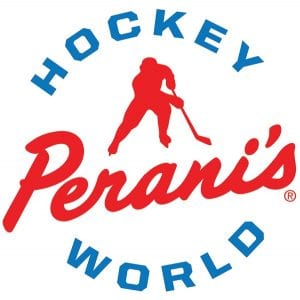 “My dad loved Flint. He came here to play hockey and decided to stay here with my mom and start a family and a business. He never forgot and always appreciated the support the community gave him throughout his playing career and his business.”

Individual game tickets went on sale on Friday and can be purchase at the arena box office or at www.ticketmaster.com.