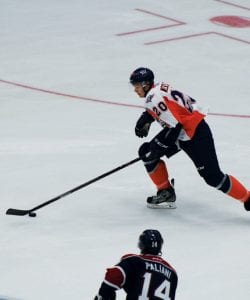 MISSISSAUGA, Ont. — After consecutive losses in Owen Sound and Erie over the past week, the Flint Firebirds of the Ontario Hockey League responded in a thrilling fashion, topping the Mississauga Steelheads 2-1 on the road on Sunday.

For those who don’t know, this was a key game for the Firebirds, who had to trade their No. 1 overall draft pick, Ryan McLeod, after he refused to report to Flint. His intention was to end up with his hometown team in Mississauga and play with his older brother, Michael.

Just 44 seconds into the game, the Steelheads grabbed the lead with an Alexander Nylander goal, which held up as the only goal of the opening frame. A few minutes into the second period, Bryce Yetman evened the score for the Firebirds with assists from Jacob Collins and Vili Saarivarvi.

With only 44 seconds remaining in regulation, however, Zach Grzelewski buried the game-winner, improving Flint’s mark to 3-1-1, with three wins, a loss and a shootout loss. Kyle Keyser made 28 saves to record his first-ever OHL win.

On Saturday night in Erie, Penn., the Firebirds displayed a sense of resiliency that will come to please the Flint fans. After falling behind 2-0 in the opening period, the Firebirds fought back with a goal in each of the first two periods to force overtime before falling to the Otters 3-2 in a shootout.

In fact, Erie attacked quickly with a power-play goal from Shaun Bily just :29 into the game. Toward the end of the period, the Otters extended their advantage with a Christian Girhiny goal at 17:35.

That lead would remain until the final few minutes of the second stanza when Zack Pittman cut the lead in half, and 6:26 into the third period, Will Bitten fired one home to eventually force overtime. Flint would out shoot Erie 6-5 in overtime, but the shootout was still necessary.

Matyas Kantner, Francesco Vilardi and Connor Chatham all failed to score in the shootout for Flint while Erie’s Nick Netz buried the game-winning tally. Zack Bowman was in net for Flint and racked up 44 saves.

After starting their franchise history with back-to-back wins over the Saginaw Spirit, the Flint Firebirds suffered their first loss in franchise history last Wednesday. Crossing the border for the first time, Flint took a 5-2 loss at the Owen Sound Attack.

The game started on a sour note for the Firebirds, and seemed to get worse as the contest went on. In fact, just 4:50 into the game, Owen Sound grabbed the lead with a Justin Brack goal. Jonah Gadjovich doubled the lead just over a minute later and Ethan Szypolia added a third marker — and it wasn’t even the end of the first period.

The barrage of Owen Sound goals in the opening frame forced Flint head coach John Gruden to pull the goaltender Bowman, who was recently named Canadian Hockey League Goaltender of the Week and OHL Player of the Week, in exchange for Kyle Keyser.

Keyser would hold off the Attack for the remainder of the period, but near the halfway mark of the second frame, Nick Suzuki buried a power play goal that gave Owen Sound a solid 4-0 lead.

Flint began to muster up a charge as Zack Grzelewski tallied a goal late in the second period and then rippled the mesh once again at the 8:09 mark of the third period. The comeback effort, however, stalled there and the Attack finished it off with once more tally, a power-play goal from Jarrett Meyer, to seal the deal.

Flint is at Sault Ste. Marie on Wednesday before returning home on Saturday to face the Sarnia Sting at the Dort Federal Event Center at 7:30 p.m. Flint is also home on Sunday at 5 p.m., welcoming the Peterborough Petes.