Firebirds bounce back to even playoff series at 1-1 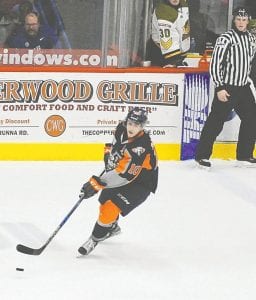 Flint’s Nicholas Caamano gains control of the puck in the neutral zone.

SAULT STE. MARIE, Ont. – Making their first-ever appearance in the Ontario Hockey League (OHL) playoffs, the Flint Firebirds responded from their game-one loss in a huge way by taking game two 6-3 in Sault Ste. Marie over the Greyhounds on Saturday. The win tied the series up as it shifts to Flint for games three and four at the Dort Federal Event Center.

The Firebirds got started quickly as Kole Sherwood found himself at the right place at the right time, scooping home a rebound just 4:35 into the game. Just a few minutes later it was a two-goal edge after Alex Peters tickled the twine on a wrist shot from the blue line.

Forty-three seconds into the second period, it was a 3-0 lead after Jalen Smereck fired one in on the power play from the point before the Hounds finally broke the shutout. Boris Katchouk scored to chip the Flint lead down to two, but the Firebirds weren’t done yet.

Maurizio Colella picked up a rebound in front of the crease and lit the lamp before Ryan Moore skated in on a breakaway and deked the goalie out of his pads, putting Flint up 5-1 after two. Zachary Senyshyn and Jack Kopacka each scored in the third to try to bring the Soo back into it, but Colella’s hard-working empty net goal put an end to that.

Connor Hicks made 24 saves in the win for the Firebirds.

In game one on Thursday, the firepower held by the Sault Ste. Marie Greyhounds turned out to be too much, as Flint fell in game one, 5-2.

The Firebirds were on their heels for most of the first period, but seemed to be holding up defensively. That is, until about the halfway point. Hayden Verbeek gave Soo the 1-0 lead, and just a few minutes later, Metamora native Kopacka lit the lamp to put the Hounds up by two.

Flint finally began to get some offensive momentum in the second period before Verbeek’s second tally of the night ballooned the Soo’s lead to three. Then the final minute of the period made for an interesting game heading into the final stanza.

Mathieu Henderson scored on a blast from the point with less than a minute left in the frame. Just 22 seconds later, Peters scored on a wrist shot from between the faceoff circles to quickly chip the deficit down to just one.

That, however, is as close as the Firebirds would get. Katchouk rippled the mesh for the Greyhounds to put them back up by two and Blake Speers buried one into the empty net late in the game.