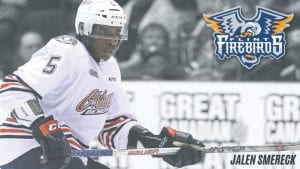 FLINT – The Flint Firebirds have made several moves in preparation of their second season in the Ontario Hockey League this coming fall. During the June 28 Canadian Hockey League Import Draft, the Firebirds made a pair of selections that could be key factors in the future of the franchise.

With the eighth overall pick, Flint selected defenseman Michal Steinocher, a right-handed shooter from the Czech Republic who most recently played for HC Slavia Phaha in Prague. He is also considered a prospect for the 2018 National Hockey League Entry Draft, which would be his first year of eligibility for professional hockey.

In the second round of the draft, Flint picked up forward Kristian Vesalainen with the 68th overall selection. Vesalainen hails from Helsinki, Finland and most recently suited up for Frolunda HC, a member of the Swedish Hockey League.

On June 30, the Firebirds made a pivotal trade to boost the power of their blue line, acquiring defenseman Jalen Smereck from the Oshawa Generals. The Generals received Flint’s fourthround

Smereck, a native of Detroit, is the franchise’s first ever African-American player. In 63 games with Oshawa last season, he recorded five goals and 20 assists while also registering a point per game in the OHL Playoffs.

“One of the biggest positives of me coming to Flint is the relationship that I built with coach (Eric) Wellwood last season,” said Smereck, referring to the former Oshawa and current Flint assistant coach. “He taught me a lot last year and it’s great to have the chance to work with him again and become a Flint Firebird.

“Just walking past the locker room as a visitor last season, it looked like a nice facility and a nice arena and it’s an incredible place to play in.”

Since the suspension of team owner Rolf Nilsen and the replacement of the coaching staff, the Firebirds have been able to land several commitments from their draft picks. Prior to the draft, it was unknown if players would commit to Flint due to last season’s controversy, but players seem to be impressed with the new regime in place.

Most of Flint’s higher-round draft picks have committed. On July 5, seventh round pick Jack Phibbs committed to playing in Flint. A forward from Cayuha, Ontario, Phibbs was selected 133rd overall and played in the Greater Ontario Junior Hockey League last season for the Brantford 99ers, recording 44 points in 50 games.

The Firebirds’ 2016-17 season begins on Wednesday, September 21 at the Dort Federal Credit Union Event Center against the rival Saginaw Spirit. Puck drop is at 7 p.m.