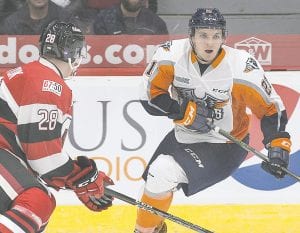 Flint’s Max Kislinger looks to make a move around a defender of the Ottawa 67’s.

FLINT – The 2017-18 Ontario Hockey League season came to an end for the Flint Firebirds with Saturday’s 4-2 loss to the Windsor Spitfires before 4,288 at the Dort Federal Event Center.

After a scoreless first period, and only one goal in the second from Windsor’s Jake Smith, things began to heat up in the final period.

Ethan Keppen got the equalizer for Flint just 5:33 into the frame, but Windsor’s Igor Larionov took the lead back. Late in the frame, goals from Daniel D’Amico and Cole Purboo all but put the game out of reach for Flint. Hunter Holmes added a cosmetic tally with less than a minute left, but the deficit was too much to overcome.

Friday’s game at the Sault Ste. Marie Greyhounds was a much different story, as Flint came back for a 4-3 overtime victory. The first goal didn’t come until early in the second period from Soo’s Rasmus Sandin. Jack Phibbs tied it up less than two minutes later, and then just :52 into the third, Phibbs scored again to take the lead.

Joe Carroll and Taylor Raddysh both tallied in the first seven minutes of the third stanza, taking the lead back for the Greyhounds. CJ Clarke responded with the equalizer late in the period, forcing overtime. Flint wasted little time sealing the win, as Fedor Gordeev buried the game-winner just 1:10 into overtime. Garrett Forrest got the win in net with 34 saves.

Flint’s season ends at 20-43-3-2 for 45 points, putting them tenth in the Western Conference and 19th overall. The Firebirds will have the second overall pick in this year’s OHL Draft.