Firebirds cap off season with split against Sarnia 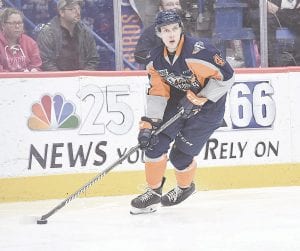 SARNIA, Ont. – The Flint Firebirds’ season ended with a 6-3 loss at the Sarnia Sting on Sunday.

The game began on a positive note with Ty Dellandrea burying his 22nd goal of the season just 2:08 into the contest. However, things went downhill from there.

Sarnia tied it up a few moments later to draw even heading into the intermission. Then the Sting registered a pair of goals in the second and two more early in the third. Cody Morgan stopped the bleeding with a power-play goal at the 11:53 mark. Sarnia answered with a goal late in the frame. Morgan tallied once more with only 0:31 remaining.

There was a different tone during the home finale in an 8-4 win over Sarnia in front of a capacity crowd at the Dort Federal Event Center on Saturday.

Ethan Keppen gave Flint the initial lead about midway through the opening period, but Sarnia drew even.

The second period is when Flint began to take over, beginning with Hakon Nilsen scoring on the power play. Hunter Holmes then scored back-toback goals in just under three minutes and then Emmet Pierce lit the lamp for the eventual game-winner.

Morgan notched one on the power play, and with less than a minute in the middle stanza, Kyle Harris got on the board. Keppen registered another goal early in the third to take a commanding 8-1 lead. Sarnia netted three more goals late in the frame, but the game was far out of reach by that point.

Luke Cavallin made 29 saves for the win.

Flint ends the season at 16-46-6-0 for 38 points, which lands it the No. 2 overall pick in this year’s Ontario Hockey League Draft.

FLINT – Two Flint Firebirds are about to make some cash for their efforts on the ice. Captain Ty Dellandrea, who was drafted in the first round of last year’s National Hockey League Draft, has been called up to the Texas Stars, Dallas’ American Hockey League affiliate.

Also, defenseman Hakon Nilsen, who is the son of Firebirds’ owner Rolf Nilsen and recently played his final game with the Firebirds, has signed with the ECHL’s Wichita Thunder.