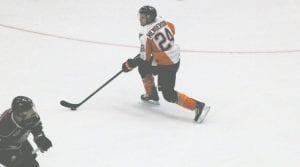 Flint’s Mathieu Henderson skates the puck out of the defensive zone, past a Saginaw defender.

WINDSOR, Ont. – Occasionally in hockey, a loss can be beneficial in the standings, and for the last few games, overtime losses have helped the Flint Firebirds maintain their current playoff spot, most recently with a 4-3 overtime loss at the Windsor Spitfires on Sunday.

Everett Clark would score less than two minutes in for Flint, outskating the defenseman and slipping it through the five-hole for a pretty goal. It would be the only tally of the opening frame.

Early in the second, Clark skated into the slot and fired a wrist shot, which was deflected in by Nicholas Caamano. Later in the period, Caamano got his second of the game on a great one-timer feed from Ty Dellandrea, putting Flint in complete control heading into the third.

That’s when things began to break down. Sean Day and Julius Nattinen scored for Windsor just 22 seconds apart before Nattinen added another less than two minutes after that, quickly tying the game. Flint would score twice, but after video review, both goals were called back, sending the game to overtime.

The Firebirds had many chances in the extra frame, but Winsdor’s Aaron Luchuk buried one to close out an amazing comeback from the Spitfires.

At the Dort Federal Event Center on Saturday, Flint made an impressive comeback before dropping a 4-3 decision in overtime to the Kitchener Rangers. Kitchener would get the only goal of the first frame as Connor Bunnaman stuffed it across the goal line.

Early in the second, the Firebirds drew even when Ryan Moore’s shot from the top of the face-off circle was tipped in by Caamano. The momentum quickly shifted back to the Rangers, though, as Bunnaman scored two more late in the period to complete the hat trick and put Kitchener up 3-1 heading into the third period.

Just 1:17 into the final stanza, Caamano skated around the entire defense and went five-hole to cut the deficit to one. It took almost the rest of the period, but the Firebirds finally tied it when Alex Peters skated in and picked up his own rebound, banking it off the goalie’s back.

Flint’s luck ran out in overtime as Nick McHugh put it in just 1:41 into the extra period.

The end result wasn’t exactly what they were looking for, but it still turned out to be a good thing for the Firebirds on Wednesday, falling at home to the Saginaw Spirit, 5-4 in a shootout. Making it into overtime, and eventually the shootout, gave Flint the one point that it needed in the standings to secure the franchise’s first-ever playoff berth.

That point, however, wouldn’t come easily. Matthew Kreis scored for Saginaw early in the game and Kris Bennett added one in the second to put Flint in a twogoal hole. Moments later, CJ Clarke’s shot rebounded to Clark, who easily scooped it in to an open net.

Flint would once again fall behind by two on a Marcus Crawford goal before the Firebirds would answer with three straight goals. Hakon Nilsen fired a shot from the blue line and Dellandrea deflected it into the net to chip away at the deficit. Just 50 seconds later, Caamano picked up a juicy rebound and put it home to tie the game.

In the final frame, Moore would grab the lead for the Firebirds, converting on a well-executed one-timer from Peters. Saginaw wouldn’t give up and Bennett got his second of the night less than two minutes later, eventually sending it to overtime.

The overtime period would see many chances but no tallies as the two rivals once again ended up in a shootout. Brady Gilmour scored on Saginaw’s second shot and Caamano would keep the shootout going with a great deke on the goaltender. Crawford, however, would score for the Spirit in the next round before Moore’s do-or-die attempt wouldn’t light the lamp.

Flint now has just three games remaining in the regular season, sitting in seventh place at 32-25-3-5 for 72 points, currently five ahead of Sarnia. The Firebirds were at Owen Sound on Tuesday, following deadlines, and will travel to London on Friday before hosting London on Saturday to cap off the regular season.

If the standings remain the same as they are today, Flint would open up the playoffs with a first-round match up against West Division rival Sault Ste. Marie.