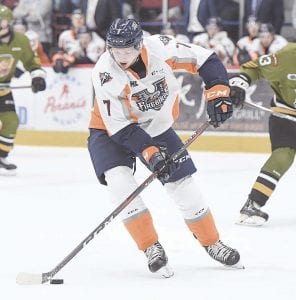 FLINT – The Flint Firebirds’ early season surge continued this weekend, most recently with a 6-3 win over the North Bay Battalion at the Dort Federal Event Center on Saturday.

Neither team was able to score in the opening period, but Jack Wismer broke the ice with his first goal of the season halfway through the middle stanza.

North Bay quickly responded, but Wismer went right back to work and took the lead back for Flint. The Battalion would draw even once again to make it a 2-2 game heading into the final 20 minutes of the night.

The Firebirds quickly ramped it up in the third with Jake Durham regaining the advantage for Flint, which was quickly doubled by an Evgeniy Oksentyuk goal just four minutes later. Ty Dellandrea got in on the fun with an insurance marker with less than five minutes remaining.

North Bay added one more goal late in the game, which Ethan Keppen answered with his third tally of the year. Luke Cavallin piled up 42 saves in the win.

The Firebirds notched a tough 4-3 overtime victory over the Kitchener Rangers on the road last Friday. Riley McCourt got Flint on the board with his tally at 8:19 of the first, which Kitchener answered four minutes later.

The Rangers grabbed the lead just 0:41 into the second, but later in the frame, Brennan Othmann evened things out to make it a 2-2 dual with one period remaining.

Flint is now at fourth place in the Western Conference at 7-3-0-0 for 14 points.

The Firebirds are home this weekend, hosting Sudbury on Friday and Sault Ste. Marie on Saturday.