Firebirds come up short in third period at Hamilton 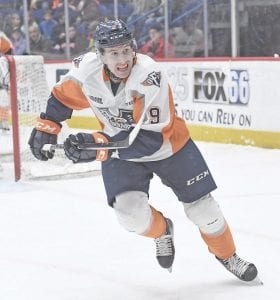 Flint’s Jack Phibbs flies toward the corner boards during a game against the Saginaw Spirit. Photo courtesy Flint Firebirds

HAMILTON, Ont. – The Flint Firebirds of the Ontario Hockey League were within striking distance of notching another rare win this season, but the third period caught up to them in a 4-2 loss at the Hamilton Bulldogs on Saturday.

Jack Phibbs put Flint up 1-0 with the only goal of the opening frame.

Hamilton drew even with the second period’s only goal before taking its first lead of the night just 1:40 into the third. Jake Durham’s 20th of the season deadlocked it at two for Flint, but Hamilton answered a few minutes later and then iced it with an empty netter.

The Firebirds took the lead, but quickly lost it in a 4-1 defeat at the Erie Otters Friday.

Riley McCourt netted just his third goal of the year to put Flint on top, but Erie answered just over a minute later. The Otters took the lead with the only goal of the second period and then added two more in the final stanza.

With a record of 3-27-2-0 for eight points, Flint remains in last place. It’ll travel to Peterborough on Thursday, Ottawa on Friday and Kingston on Sunday.