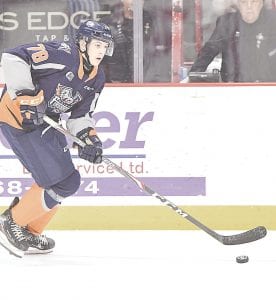 FLINT – It has been a stellar beginning to the 2019-20 season for the Flint Firebirds of the Ontario Hockey League, most recently grabbing a 4-1 win over the Sault Ste. Marie Greyhounds at the Dort Federal Event Center on Saturday.

Brennan Othmann got things started, netting his fifth of the season in the first period.

In the middle frame, Jack Phibbs upped the lead to 2-0 before the Greyhounds answered back a few minutes later to chip away at Flint’s lead. However, in the third, the Firebirds ended up putting it away. Jack Wismer buried an empty netter, as did Phibbs, to secure the victory. Luke Cavallin recorded 30 saves.

Flint thwarted a second-period comeback attempt by the Sudbury Wolves, picking up a 5-2 win over the Subury Wolves at home on Friday.

The first period was electric for the Firebirds, beginning with an Ethan Keppen goal just 7:28 into the game.

Wismer doubled the lead less than two minutes later and then Phibbs fired one home in the final minute of the contest.

The Wolves made things interesting in the second stanza, scoring both goals in the period to make it a 3-2 Flint lead approaching the final period.

Once again, the Firebirds used the third to put things on ice. Jake Durham scored on the power play early in the period, but the game was put away with Ty Dellandrea’s empty netter in the final minute. Anthony Popovich recorded 47 saves.

Flint currently sits in fourth in the Western Conference at 9-3-0-0 for 18 points. The Firebirds are at the Owen Sound Attack on Wednesday, at the Sarnia Sting on Friday and host the Barrie Colts on Saturday.