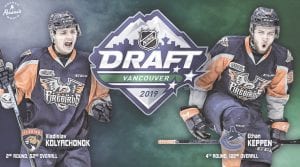 Dellandrea is only one of 43 players invited, which will take place between July 27-Aug. 4 in Plymouth. The players competing are looking to make Canada’s team for the 2020 International Ice Hockey Federation Word Junior Championships in Trinec, Czech Republic.

“We’d like to congratulate Ty on his invitation to Canada’s National Junior Team Summer Development Camp,” said Flint Firebirds Vice President of Hockey Operations and General Manager Barclay Branch. “It’s an honor to receive this invitation and we wish him best of luck at camp.”

Firebirds’ forward Evan Vierling will also be in action this summer, getting an invitation to Canada’s National Summer Under-18 Team Selection Camp. 44 players will attend the camp, 16 of which from the OHL.

The camp will be held July 26-30 at the Markin MacPhail Centre at WinSport’s Canada Olympic Park in Calgary, Alberta.

“This is another big step in Evan’s hockey career,” said Branch. “We’d like to congratulate Evan and his family on this achievement and wish him success at camp.”

Flint also added some talent with the selection of forward Evgeni Oksentyuk with the fifth pick in the first round of the 2019 Canadian Hockey League Import Draft. A Belarus native, Oksentyuk helped lead his homeland with six points in the 2019 U-18 World Championship.

“Evgeni is a highly skilled, world-class forward that has a strong compete level in all areas of the game,” said Branch. “We are excited to be adding Evgeni to our growing nucleus of young talent.”

Forwards Brennan Othmann and Braeden Kressler, who recently committed to the Firebirds, will both be headed to Canada’s U-17 development camp on July 19-26 at the Markin McPhail Centre.

“On behalf of everyone in the Firebirds’ organization we would like to congratulate Brennan and Braeden on being selected to attend Hockey Canada’s Under-17 Development Camp,” said Branch. “It is a great accomplishment for both of them and we could not be happier for them.”

All of this follows Vladislav Kolyachonok and Ethan Keppen each being selected in the National Hockey League Draft last month. Kolyachonok was selected 52nd overall in the second round by the Florida Panthers. Keppen was taken in the fourth round, 122nd overall, by the Vancouver Canucks.