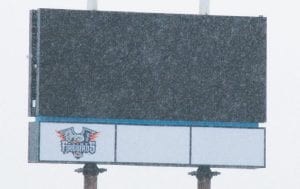 The sign outside Perani Arena is ready for the Firebirds’ inaugural season.

FLINT — The Ontario Hockey League’s Flint Firebirds have been quite busy in recent weeks, bringing on more coaches and players. The big announcement comes today, however, when the new name and the naming rights partner for the current Perani Arena and Event Center will be announced at 11 a.m. at a news conference open to the public. Rolf Nilsen, Owner of IMS Hockey and Arena Corporations and the Flint Firebirds, Costa Papista, President of IMS Hockey Corp, Flint Mayor Dayne Walling and distinguished guests and executives from the arena’s new naming rights partner will all make short remarks. Kyle McCree from the Flint and Genesee Chamber of Commerce will emcee the short program.

A lot has happened in the past couple weeks as everyone awaited the major announcement. It began on June 23 with the addition of Petr Jonak to the coaching staff, who has helped develop programs in the Czech Republic for many years.

“We are extremely excited to have Jonak as a member of our coaching staff,” said general manager Terry Christensen in a press release. “He brings a diverse background to our club. Whether it be his ability to develop individual player skills both on and off the ice or the level of knowledge that he’ll bring to our special teams game, Petr will be a huge asset.”

Last Tuesday was the Canadian Hockey League’s import draft, during which the Firebirds selected defenseman Vili Saarijarvi in the first round and forward Matyas Kantner in the second round. Kantner posted 46 points this past season in the Czech Republic while Saarijarvi is a third-round pick of the Detroit Red Wings, who appear to want him to develop in Flint for the time being.

The Firebirds then made their first-ever player trade the following day, acquiring defenseman Zach Pittman in a trade with the Ottawa 67s. Pittman is a native of Macomb and played two seasons with the United States Hockey League’s Lincoln Stars before moving up to Ottawa of the OHL last season.

On Monday it was announced that Matthew Nareski had been hired to become Flint’s head equipment manager. Prior to arriving in Flint, Nareski has spent the last nine seasons in the same position within Northeastern University’s hockey program.

On Tuesday, renovations could be easily seen at Perani Arena, as a new sign was finally being installed in the driving rain.