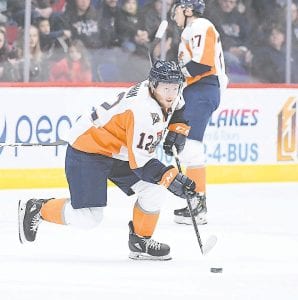 FLINT – A weekend home stand was a success for the Flint Firebirds, most recently corralling a 3-2 win over the Sault Ste. Marie Greyhounds at the Dort Federal Event Center on Saturday. It was also Military Appreciation night at the rink, allowing discounted tickets for veterans.

Jake Durham got things off on the right foot, scoring his sixth goal of the season just 0:57 into the game. The Hounds evened it later in the frame.

However, late in the middle stanza, Cody Morgan grabbed the lead back for Flint with his fourth goal of the year. Soo deadlocked it once more, scoring with only 29 seconds remaining in the second, taking the 2-2 draw into the third.

A power play proved to be the difference in the game, leading to Ethan Keppen’s game-winner at 4:58. Anthony Popovich registered 29 saves.

Flint overcame a monumental deficit to take a 5-3 win over the Mississauga Steelheads at home on Friday. It was also 810 day at the Dort, handing out 810 Firebirds’ shirts to the first 400 fans in attendance.

Things looked bleak after the first period with the Steelheads taking a 3-0 lead into the intermission, but in the final two minutes of the second, the momentum began to shift. Riley McCourt scored on the power play and then he added one more goal with 45 seconds left in the middle frame to cut the deficit to one heading into the final period.

Connor Roberts netted the equalizer, which led to Evgeniy Oksentyuk’s game-winner on a penalty shot. Keppen buried an empty-netter to finish it off. Luke Cavallin made 25 saves in net.

The victories boosted Flint to 12-5- 0-0 for 24 points, placing it in first place in the Western Conference. The Firebirds will have a busy week hosting Sarnia on Wednesday, then are at London on Friday and welcoming Ottawa on Saturday.