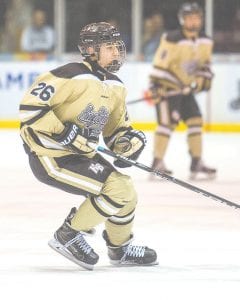 FLINT – The Flint Firebirds bolstered their roster for the future during Saturday’s Ontario Hockey League Priority Selection, taking 15 young prospects. Flint had a handful of high picks, including the No. 2 overall pick, which they used to select forward Evan Vierling.

“We’re extremely excited and couldn’t be happier with how the draft ended up for our club,” said Flint Firebirds Vice President of Hockey Operations & General Manager Barclay Branch. “We felt is was a very successful day for this franchise and it will be shown moving forward. We were very prepared, we had a plan going in and executed the plan perfectly. I cannot say enough about the work that Joe Stefan, Dave McParlan and our entire staff did. They’re a collection of great people and great hockey people that work extremely hard.”

Vierling hails from Aurora, Ont. and registered 27 goals and 36 assists in just 33 games last season. He suited up for the York Simcoe Express Minor Midget AAA team, which is a member of the Eastern Toronto Area Hockey League. Vierling is in good company, as the No. 2 overall pick went on to play in the National Hockey League for 14 years in a row, beginning in 1999.

“Being drafted by the Flint Firebirds means everything to my family and I,” said Vierling. “I’ve heard such great things about this organization, the arena, fans and the city. So many great players have come out of the OHL and I’m happy to now be part of it, competing against the top players in the world. I’m so grateful and honored for the opportunity and could not get here without my parents, family, coaches and teammates.”

In the second round, the Firebirds looked to add some power to their blue line, taking defenseman Owen Power at No. 22 overall. Power is from Mississauga, Ont. and played his youth hockey with the Greater Toronto Hockey League’s Mississauga Reps AAA. He recorded nine goals and 24 assists during just 32 games last season.

The focus remained on the blue line in the third round where Flint snagged defenseman Michael Bianconi at the No. 48 overall spot. He racked up five goals and 26 helpers during 57 games last year. He suited up in the GTHL for the Toronto Jr. Canadiens AAA squad.

The fourth round led to the future between the pipes with Flint taking goaltender Christian Linton at No. 62 overall. He padded up for the Guelph Gryphons AAA squad last year, a member of the South Central Toronto Area Hockey League last year. His goalsagainst average was 2.80 and he boasted a .935 save percentage.

The focus went back to offense in the fifth round with Flint selecting forward Ryan Mansfield out of Burlington, Ont. Flint tabbed him at No. 82 overall. Mansfield notched 28 goals and 16 assists in 31 games last year, suiting up for the Burlington Eagles AAA of the SCTA.

Adding another defenseman in the sixth round, the Firebirds picked up Tyler Deline with the 102nd overall selection. Deline picked up five goals and 14 assists in 35 games last year with the Peterborough Petes AA team. Deline is also a native of Peterborough, Ont.

The seventh round led to another defensive selection in Jack Harper at No. 122 overall. Harper skated for the Guelph Jr. Gryphons of the SCTA last year, where he totaled 12 goals and 24 helpers in 35 games. He’s also been selected as a Bantam All-Star.

Flint went back to the net in the eighth round, 162nd overall, by taking goaltender Chase Clark. Clark hails from Williamsville, NY and he played AAA-level hockey with the Toronto Nationals of the GTHL. Clark played in the Under Armour top prospects game and was the Tyler Cragg Memorial MVP.

The tenth round led to the selection of left wing Evan Boucher at 182nd overall. The Ottawa, Ont. native was a member of the Rockford Nationals of the Hockey Easter Ontario League last year. He played in 41 games, where he recorded 11 goals and 20 assists.

Owen Holmes, the younger brother of current Firebird Hunter Holmes, became Flint’s next pick in the 11th round, 202nd overall. Holmes registered nine goals and 17 assists in 34 games and has two OMHA silver medals. He is a native of Niagara on the Lake, Ont.

The 12th round led to the selection of defenseman Brandon Chabrier at No. 222 overall. Hailing from Bayville, NY, Chabrier tallied five goals and 16 asissts in 15 games last year with the Portledge High team in Local Valley, NY. He also suited up for the Long Island Gulls in the Atlantic Youth Hockey League.

At No. 242 overall of the 13th round, Flint picked up defenseman Chris Colavecchia. Originating from Toronto, Ont., Colavecchia racked up eight goals and 12 assists in 62 games as a member of the Don Mills Flyers of the GTHL.

Left wing Austin Robinson then begace the Firebirds’ 14th round pick, 262 overall. Hailing from Buffalo, NY, Robinson tacked up three goals and 10 assists as a member of the Buffalo Jr. Sabres in the Tier One Elite Hockey League.

Flint’s final selection, at No. 282 in the 15th round, became defenseman Ronan McQueenie. Coming from North York, Ont., McQueenie picked up two goals and 14 assists in 50 games last year with the Vaughan Kings of the GTHL.