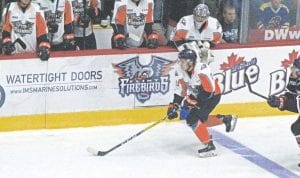 Flint defenseman Dennis Busby flies through the neutral zone with the puck.

SAULT STE. MARIE, Ont. – The magical turnaround season for the Flint Firebirds came to an end at the Essar Centre in Sault Ste. Marie last Friday as the Greyhounds put up the largest win of the series to eliminate the Firebirds from the Ontario Hockey League playoffs, 6-1. Flint was only able to get a victory in game two of the series.

The first period of game five didn’t reflect the final score at all. The Hounds did take the initial lead on a Gustav Bouramman goal, but Kole Sherwood fired one of his signature wrist shots to tie the game at one. What happened next would change the momentum of the entire game and ultimately put an end to the series.

Tim Gettinger had the puck behind Flint’s net, and rather than pass it into the slot, he shot the puck off the back of Flint goaltender Connor Hicks’ skate and into the net, narrowly beating the buzzer at the end of the first period. After review, it was determined that the puck crossed the goal line before the clock struck zero.

After that, the Firebirds were never the same and the Greyhounds lit up the scoreboard. Boris Katchouk scored on the power play early in the second and a minute later Gettinger got his second of the night. Less than two minutes after that Zachary Senyshyn buried one and 39 seconds later David Miller boosted it to 6-1.

At that point, the Soo took its foot off the gas, but it was too big of a deficit for Flint to overcome.

Game four resulted in a 5-2 loss to the Greyhounds at the Dort Federal Event Center last Wednesday.

It was a tough game for Flint, falling behind 4-0 early in the second period. Morgan Frost got the game’s first goal and Otto Makinen added another as the Soo led 2-0 after the first period. Katchouk would score just 17 seconds into the second stanza and Miller lit the lamp just two minutes later, putting Flint in a massive hole.

Everett Clark would finally break the shutout as he sniped one into the back of the net, but Flint still trailed 4-1 after two. Early in the third, it became 5-1 on a Bobby MacIntyre goal. Sherwood would add another marker for Flint, but the deficit would be too big to overcome.

The Firebirds suffered a pivotal loss in game three at the Dort Federal Event Center on Monday, 3-1. Sherwood started off the scoring early on, sniping a wrist shot glove side for the 1-0 lead.

Despite a 34-28 advantage in shots, though, Flint’s scoring ended there. Gettinger cashed in on a great pass from Hayden Verbeek early in the second on the penalty kill to tie the game and Senyshyn gave the Hounds the lead in the third. Katchouk bagged an empty net goal late in the game.

Flint’s lack of scoring could be credited to the absence of leading scorer Ryan Moore, who has been suspended by the OHL for five games for making an inappropriate comment to an opponent during games two in Sault Ste. Marie.

Although the ending is disappointing, the Firebirds made a dramatic turnaround from where they were a year ago and seem to have a bright future with a lot of young talent, a solid coaching staff and an experienced general manager, who has made some great trades to boost the roster since the day he was hired.