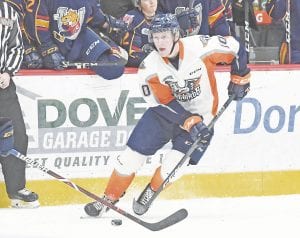 FLINT – It was another tough weekend for the Flint Firebirds, losing three games in three nights, but at least finally gained a point in the standings. Their most recent affair was a 7-1 loss to the Niagara IceDogs at the Dort Federal Event Center on Sunday.

Flint got behind the eight ball in a hurry, allowing four goals in the first 18 minutes of the game. Ty Dellandrea got the home fans going a bit with a power play goal with only 15 seconds remaining in the opening period.

That’s as close as Flint would get, allowing a Ben Jones tally in the second and a pair of Kyen Sopa goals in the third.

The Firebirds’ first point in the standings so far this season came in a 6-5 overtime loss to the Sarnia Sting at home on Saturday. Not only that, they showed a strong resiliency after having fallen behind 3-0 after the first period.

The late second frame is when a comeback began to mount with Connor Roberts and Jack Phibbs each rippling the mesh in the final two minutes of the stanza. Roberts then got his second of the night in the opening moments of the third, tying the game.

Then it was an exchange of punches for the remainder of the period. After Sarnia jumped back on top, Ethan Keppen drew even with a power play goal near the midway mark. Sarnia answered it, but Keppen came right back with his second of the night to force overtime.

The extra period would only last 1:03 before Sarnia’s Ryan McGregor buried the game-winner.

Flint was at Sarnia in a 4-2 loss on Friday. Just like Saturday, Sarnia took an early lead, outscoring the Firebirds 2-0 in period one. Flint’s Jack Wismer notched the only goal of the middle frame to cut the deficit in half, but Sarnia added a pair in the third to go up 4-1.

Jacob Winterton added a cosmetic goal with 1:02 left in the contest.

Flint finally got a point in the standings, where it currently sits a 0-13-1-0. The Firebirds are at Sault Ste. Marie on Wednesday, at London on Friday and host Ottawa on Saturday.