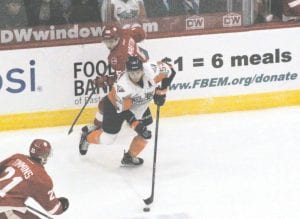 Flint’s Ty Dellandrea looks for the pass as he skates the puck between a pair of Sault Ste. Marie defenders.

ERIE, Pa. – Although all three games were close, the Flint Firebirds of the Ontario Hockey League weren’t able to register a victory on this past weekend’s three-game road trip, most recently a 4-3 shoot-out loss at the Erie Otters.

The Firebirds burst out of the gate in the early moments when Ty Dellandrea and Maurizio Colella each netted goals to put Flint up 2-0 just eight minutes into the game.

The second period saw a reversal of fortune, however, beginning with Christian Girhiny’s goal, which Hayden Fowler followed up just 30 seconds later to draw even. CJ Clarke put Flint back on top later in the period, but the only goal of the third was from Erie’s Patrick Fellows, forcing overtime, and eventually, the shootout.

Fellows and Ivan Lodnia each lit the lamp in the shootout, quickly ending it after Flint was unable to convert either attempt.

Saturday’s game at the Hamilton Bulldogs was one of momentum shifts, ultimately ending in a 4-3 loss for Flint. Hamilton got the only goal of the opening period, registered by former Firebird Nicholas Caamano.

The second period belonged to Flint, though, as Riley McCourt got his second of the season to tie things up. Later in the frame, captain Jalen Smereck buried the go-ahead goal to take a 2-1 edge into the intermission.

In the third, Caamano scored again at the 7:14 mark to draw even, but Jacob Collins answered moments later to put Flint back on top. That’s when things began to shift back to Hamilton for good with goals from Isaac Nurse and Brandon Saigeon.

The momentum swings were even bigger during Friday’s 5-3 loss at the Oshawa Generals. Oshawa carried a 3-0 lead into the final stanza after first-period goals from Eric Henderson and Renars Krastenbergs and a second period tally from William Ennis.

Eight minutes into the third, however, things would completely change. Hunter Holmes got Flint on the board just 1:20 into the period and Connor Roberts notched his eighth of the year moments later. At the 8:13 mark, Maurizio Colella’s goal was the equalizer, coming all the way back in a matter of minutes.

The excitement would be short lived, though, as Hayden McCool and Kenny Huether each scored in the final seven minutes to seal the win for Oshawa.

Flint remains at the bottom of the West Division and Western Conference at 12-25-3-1 for 28 points. The Firebirds returned home on Wednesday against Sarnia, following press deadlines, and will host Sault Ste. Marie on Saturday before traveling to Windsor on Sunday.