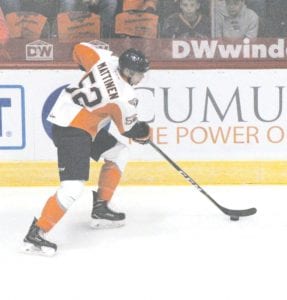 Flint’s Nicolas Mattinen skates the puck along the boards in the offensive zone.

SARNIA, Ont. – A tough stretch for the Flint Firebirds of the Ontario Hockey League was capped off on Sunday with a 6-2 loss at the Sarnia Sting.

The Sting had control of the game from the opening faceoff and quickly took a 2-0 lead after a pair of tallies from Sean Josling. Drake Rymsha pushed it to a 3-0 lead in the second before Jack Phibbs finally got Flint on the board.

Before the second stanza came to a close, though, it would evolve into a 5-1 Sarnia advantage after goals from Jordan Kyrou and Jordan Ernst. Ryan Littlejohn rippled the mesh for Flint early in the third, but Adam Ruzicka added an insurance goal later in the frame.

Saturday’s home game against the Sault Ste. Marie Greyhounds couldn’t have gone much worse for the Firebirds in a 7-0 loss. Barrett Hayton scored twice in the first for the Hounds before Jack Kopacka, Tim Gettinger, Morgan Frost and Boris Katchouk all added tallies in the second frame to jump to a 6-0 lead. Frost added one more in the third to finish it off.

Friday was another tough pill to swallow for Flint in an 8-2 loss at the London Knights. Robert Thomas scored just 12 seconds into the game and Alex Formenton and Cliff Pu added first-period goals to give London a 3-0 lead into the locker room.

Ethan Keppen scored early in the second for Flint before Thomas, Billy Moskal and Thomas once more made it a 6-1 game. Nicholas Caamano scored another goal for the Firebirds, which was answered with goals from Tim Fallowfield and Thomas, his fourth of the night.

Flint is now 6-7-1-0 for 13 points, placing them fourth in the West Division. Flint travels to Saginaw today for its first meeting with the Spirit before hosting North Bay on Friday and Guelph on Saturday.