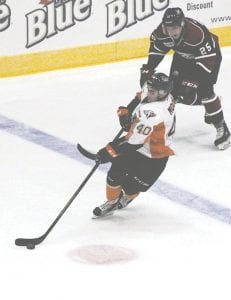 Flint’s Ryan Moore picks up speed as he lugs the puck through the neutral zone.

FLINT – In front of a standing room only crowd of 4,250 in the regular season finale at the Dort Federal Event Center on Saturday, the Flint Firebirds fell behind early and began to claw their way back into it before time ran out in a 3-2 loss.

The game was scoreless until late in the first period when London’s JJ Piccinich would be the first to light the lamp. Just 2:01 later, Nicolas Mattinen added another to put London up 2-0 after one. Less than two minutes into the middle frame, Sam Miletic upped London’s advantage to three before the momentum finally began to swing in favor of Flint.

Moments later Jalen Smereck blasted a shot from the top of the face-off circle and rippled the mesh for Flint’s first tally. Late in the second, Kole Sherwood skated in and faked the pass, pretended to shoot, and at the last minute sent a cross-ice pass to a wide-open Maurizio Colella, getting Flint back within one.

The third period, however, would go scoreless.

The night before in London, the Firebirds were in the game early but fell behind in the second and third periods in a 7-3 loss. Alex Formenton would get on the board first for London before Fedor Gordeev answered with a slap shot right off the faceoff to tie the game up.

Late in the opening stanza, Max Jones buried one to put London on top once again, which was answered early in the second when Everett Clark converted on a juicy rebound in the slot. After that, things began to slide downhill.

Janne Kuokkanen, Liam Foudy and Adrian Carbonara all scored for the Knights in the second period and Jones and Dante Salituro added goals in the third. Flint would add one more when Alex Peters scooped in a rebound on a breakaway, but it was too late to try to get back into it.

Flint lost on the road Tuesday 6-4 to the Owen Sound Attack. Flint was behind the eight ball almost instantly after Owen Sound got first period goals from Sean Durzi and Cordell James.

Later in the period, Nicholas Caamano got Flint on the board with a great deke in the slot to cut the deficit in half. However, it quickly grew back to a two-goal hole when Maksim Sushko scored for the Attack with less than two minutes left in the frame.

Early in the second, the Firebirds climbed back into it quickly. Hakon Nilsen got his third of the season on a long shot from the blue line and Jake Durham buried his 10th of the season just 34 seconds later to draw even.

That wouldn’t last long as Jonah Gadjovich and Petrus Palmu each scored within 16 seconds of each other to put the Attack back up by two. CJ Clarke brought Flint back to within one later in the frame but Nick Suzuki lit the lamp for Owen Sound after that. That lead for the Attack would hold up as the third period went scoreless.

Flint ends the regular season at 32-28-3-5 for 72 points and opens the playoffs this week against the Sault Ste. Marie Greyhounds. Game one is Thursday in the Soo and so is game two on Saturday. Games three and four will be in Flint on March 27 and 29. Game five, if necessary, will be in the Soo on March 31, game six in Flint on April 2 and game seven in the Soo on April 4.