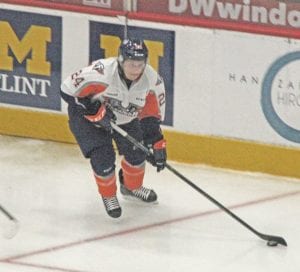 LONDON, Ont. – It was a weekend of ups and downs for the Flint Firebirds, most recently dropping a 6-2 decision at the London Knights on Sunday. The Firebirds actually had the initial lead midway through the first period as Kole Sherwood’s wrist shot found a way to squeak through the goalie’s pads for the 1-0 lead.

That would be Flint’s last advantage of the game though as the Knights ripped off three unanswered goals in the second period. Sam Miletic scored twice and then Robert Thomas added a goal of his own after assisting on both Miletic tallies for a 3-1 lead.

Nicholas Caamano finally stopped the bleeding in the third period by shoveling home a rebound at the 4:27 mark before London went on another three-goal tear. JJ Piccinich and Adrian Carbonara each buried a goal within a minute of each other and Thomas added his second of the night at the 11:40 mark to finish the game off.

On Saturday at the Dort Federal Event Center, the Firebirds battled but couldn’t get past the Windsor Spitfires in a 2-1 loss. Aaron Luchuk gave Windsor a 1-0 lead early in the opening period until Ryan Moore fired one into a wide-open net after a great set up by Everett Clark and Mathieu Henderson to tie the game.

Cristiano DiGiacinto would score the game-winner for the Spitfires just 13 seconds into the second period.

Friday was a much different story as Flint cruised to a 4-0 home win over the Niagara IceDogs. The goals didn’t come until the middle of the second period when Alex Peters’ wrist shot was tipped into the back of the net by Hunter Holmes for a 1-0 edge.

A few minutes later, Caamano stole the puck and buried a wrist shot from the faceoff circle, doubling the lead. Late in the period, Sherwood found a loose puck in the crease and poked it across the goal line for a power play tally.

The final goal, once again on the power play, came on a Jalen Smereck blast from the point, his fourth of the season. Connor Hicks made 25 saves in net to record the shutout.

Flint is now in fourth place in the West Division and eighth in the Western Conference with a 14-12-0- 2 record for 30 points. The Firebirds will now travel to the North Bay Battalion on Thursday before heading to the Sudbury Wolves on Friday and the Barrie Colts on Saturday.