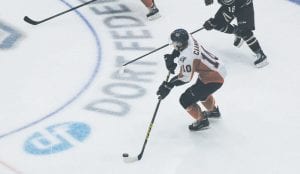 Flint’s Nick Caamano skates the puck through the neutral zone.

OWEN SOUND — In a goaltenders’ battle on Saturday, the Flint Firebirds of the Ontario Hockey League put up a solid effort, but fell one goal short in a 2-1 loss at the Owen Sound Attack. The Attack outshot Flint, 31-24.

The decisive goal of the contest, though, came at 11:34 of the third period as Jaden Lindo rippled the mesh to put Owen Sound ahead with the eventual game-winner. Alex Nedeljkovic made 29 saves in net for the Firebirds.

Goals usually don’t get scored as often as they did on Thursday in Barrie, Ontario, as the Flint Firebirds went on to fall to the host Barrie Colts in OHL action, 8-5. Barrie out-shot Flint, 47-36, throughout the contest that was loaded with scoring opportunities.

The Colts, though, began the game on a four-goal tear that seemed insurmountable for the Firebirds, three of which came in the first period. In fact, Roy Radke would get the first two for Barrie, the first of which came just :52 into the game. His second tally would come at 8:54.

Just a couple of minutes later, Cordell James added one of his own, and less than two minutes into the second frame, Julius Nattinen put Barrie up by four. That’s when Flint finally began to respond.

Will Bitten fired one home at 3:55 and then Nick Caamano cut the lead in half with a tally at the 5:20 mark. Another Barrie goal, this one from Michael Webster, forced Flint coach John Gruden to pull goaltender Nedeljkovic in favor of Kyle Keyser.

At the 12:49 mark of the second period, Flint got back within two goals as Caamano recorded his second of the night, and then early in the third, Ryan Moore picked up a shorthanded goal to draw it back to a one-goal game.

That is, before Barrie went on another goal-scoring streak, this time three in a row. James, Rasmus Andersson and Ben Hawerchuk put Barrie ahead 8-4 in the third period. Dane Johnstone buried another for Flint at 12:59, but it wouldn’t be enough to overcome Barrie’s offensive onslaught.

Bitten and defenseman Alex Peters were chosen to compete for team OHL during the 2015 OHL Canada-Russia Series. The games will take place on Nov. 12 in Owen Sound and Nov. 16 in Windsor.

Flint also made a couple of transactions this week, sending goaltender Zack Bowman to the Sudbury Wolves for a fourth-round draft pick in the 2017 OHL draft. The Firebirds also sent forward Bryce Yetman to the Sault Ste. Marie Greyhounds in exchange for a conditional draft pick in 2017.

The Firebirds are also looking for help naming their new mascot. To submit a name idea, log onto www.flintfirebirds.com.

The back-to-back losses have dropped the Firebirds to fourth place in the West Division at 5-5-0-1 for 11 points. Flint is on the road at Saginaw on Wednesday and again at Windsor on Thursday before returning home for a Halloween matinee game at 2 p.m. on Saturday against the Owen Sound Attack.