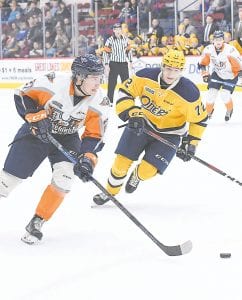 Flint’s Riley McCourt skates past a defender during a game against the Erie Otters. Photo by Todd Boone/Flint Firebirds

FLINT – The Flint Firebirds have picked up some steam as the Ontario Hockey League regular season winds down, most recently notching a 4-1 win over the Windsor Spitfires at the Dort Federal Event Center on Saturday.

Things started out a little rough with Windsor netting the first goal of the night, but in the second period, the momentum began to swing.

Emmet Pierce buried the only goal of the middle frame to draw Flint even, then midway through the third, Cody Morgan’s 11th of the season turned out to be the game-winner. Hunter Holmes lit the lamp for an insurance marker before Ethan Keppen got the empty-netter.

Flint played a really good game, but narrowly lost 3-2 in overtime at the London Knights on Friday. Keppen registered the only goal of the first period, which London answered with a pair in the second to take a 2-1 lead into the third.

Holmes deadlocked the game at two at the 7:09 mark of the third, eventually forcing overtime. London ended the night just 2:24 in to the extra frame to seal it. Emanuel Vella made 54 saves.

Flint is now 14-45-6-0 for 34 points as it enters the final week of the season. The Firebirds are at Windsor on Thursday, host Sarnia on Saturday and then head to Sarnia on Sunday.