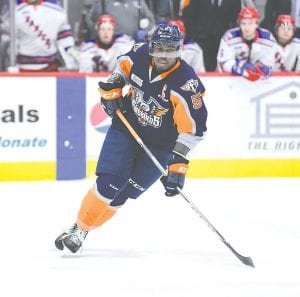 Flint defenseman Jalen Smereck skates along the blue line against the Kitchener Rangers.

SAGINAW – When the Flint Firebirds traveled to the Saginaw Spirit on Saturday, they spent most of the game trying to comeback, but couldn’t finish it off in a 3-2 loss. Ryan Stepien scored the first goal of the game for Saginaw, which Ty Dellandrea answered late in the period to tie it up.

That draw only lasted :30 when DJ Busdeker gave Saginaw a 2-1 lead heading into the locker room. Mason Kohn’s goal at 11:51 of the second gave the Spirit a two-goal edge, but Maurizio Colella got Flint back to within one late in the middle frame. Neither team was able to find the net in the third, as Saginaw skated away with the win.

Friday’s game at the Dort Federal Event Center against the Sarnia Sting was another close one, but Flint came back to win 3-2 in overtime. Sarnia’s Jonathan Ang scored the initial goal, the only of the opening period. Connor Roberts notched a power-play tally in the final minute of the middle period to tie the game up.

Early in the third, Anthony Salinitri’s goal put Sarnia back on top, however, Dellandrea buried his 21st of the year for the equalizer, forcing overtime. Overtime lasted all of :23 when Colella found the back of the net with the help of Dellandrea.

The Firebirds will now be on a road trip at North Bay on Thursday, Sudbury on Friday and Barrie on Saturday.

Next Wednesday, the Firebirds will be hosting the Barrie Colts, who have Russian forward Andrei Svechnikov, brother of the Detroit Red Wings’ 2015 first-round pick Evgeny Svechnikov who currently suits up for the Grand Rapids Griffins of the American Hockey League. Andrei is ranked No. 1 by the National Hockey League’s Central Scouting amongst North American skaters, which will likely put him as the No. 1 overall pick in the NHL Draft in June.