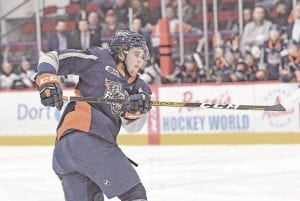 FLINT – The Flint Firebirds are on their hottest stint in franchise history, winning their seventh game in a row with a 5-3 win over the Kitchener Rangers at the

Tyler Tucker got things going with the only goal of the opening period.

Jack Wismer doubled the lead with his 15th goal of the season early in the second before Kitchener answered back moments later. Wismer then netted his second score of the night, which the Rangers responded to, making it a 3-2 Flint lead. Jack Phibbs added one late in the period to give the Firebirds a two-goal advantage approaching the third.

Kitchener’s power-play goal made it a one-score contest in the latter moments of the third, but Evgeniy Oksentyuk buried the empty-netter to ice the game.

Flint also won 4-3 in overtime over the Erie Otters at home on Friday.

Riley McCourt, had a big night, beginning with a goal just 1:19 into the game, the only score of the first period.

He then tallied again in the second, which Erie countered with a goal late in the middle frame.

The Otters tied it up early in the third, but Brennan Othmann put Flint back on top, 3-2. Erie scored the equalizer late in the third, forcing the extra frame.

That’s when McCourt completed his big night, and his hat trick, scoring the game-winner in overtime.

The Firebirds are in fifth place in the Western Conference, one point out of fourth place, at 29-17-1-1 for 60 points. They are at Erie on Friday, Hamilton on Saturday and Oshawa on Sunday.