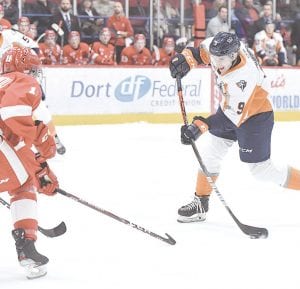 Flint’s Jack Phibbs scored the only Firebirds’ goal during a 4-1 loss at the Sault Ste. Marie Greyhounds on Wednesday. Photo by Todd Boone/Flint Firebirds

That, however, was far from being the top story. The Ontario Hockey League, along with essentially every other sports league, has indefinitely suspended play due to concerns of the coronavirus in Michigan.

The Hounds scored at 16:02 of the third, which Flint answered with a Jack Phibbs goal less than two minutes later. Sault Ste. Marie added an emptynet goal in the final minute.

As of now, the remaining games will not be played until further notice. The drastic spread of coronavirus has led to the indefinite suspension of not only sports, but large gatherings in general.

“Due to escalating concerns about the spread of the COVID-19 virus, the Canadian Hockey League, along with the CHL Executive Council, and regional league Board of Governors, announced it would pause the 2019-20 season,” read a statement from the Firebirds Thursday afternoon.

“As a member club, the remaining Flint Firebirds games will be suspended until further notice from the CHL. All scheduled Flint Firebirds community events will also be postponed at this time.

“The health and well-being of our players, staff, fans, and community is our top priority and we appreciate the understanding under these extraordinary circumstances. The Firebirds are committed to sharing more information as soon as possible.

“In the meantime, ticket holders for upcoming Firebirds regular season and playoff games are encouraged to keep their tickets until further information becomes available.”