Firebirds fall in 6 of the last 7 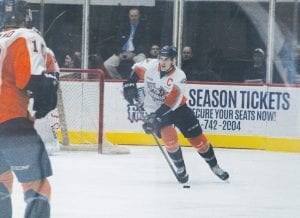 Flint’s Alex Peters looks up ice while bringing the puck out of the Firebirds’ defensive end.

HAMILTON, ONT. — The Flint Firebirds played their final weekend before the Christmas break, most recently traveling to Flint’s sister city, Hamilton, in a 4-2 loss to the Hamilton Bulldogs on Saturday night.

The Firebirds got on the board first as Connor Chatham scored just 4:23 into the game before Flint hit an offensive drought. The Bulldogs would rack up three first period goals to grab a 3-1 lead, an advantage that lasted until the third period.

Hamilton then went up 4-1 at the 5:53 mark of the final stanza before Flint finally got the puck in the net again, this one from Ryan Moore, his 12th of the season.

Flint, however, pulled off a massive upset on Friday in Oshawa, taking down the defending Ontario Hockey League and Memorial Cup Champion Generals, 4-1, to snap the Firebirds’ five-game losing streak.

Nicholas Caamano put up the game’s first goal for Flint just seven minutes in and that would be the only goal until the later moments of the third period. In fact, the Firebirds took a 2-0 lead late in the game when Chatham scored his ninth of the season. Oshawa, however, finally responded with a goal, and as time ran out, elected to pull their goaltender.

That strategy backfired, though, as Caamano put one into the empty net, as did Will Bitten with nine seconds remaining, ending the losing skid. Flint had a combined effort in net between Brendan Johnston and Brent Moran, who collaborated to stop 41 shots.

The Firebirds took a heartbreaking loss on the road on Wednesday night, which at the time, knocked them into last place in the OHL’s West Division with an 8-4 loss to the Saginaw Spirit.

The scoring seemed non-stop and it didn’t take long to see the lamp lit. Saginaw’s Matthew Kreis got things started with a goal just four minutes in. Less than 20 seconds later, though, Flint’s Francesco Vilardi fired home a wrist shot to even things up.

That’s when the Spirits went on a tear that Flint just couldn’t rebound from. Devon Paliani took the lead back a couple of minutes later and the Dylan Sadowy doubled their edge just 19 seconds later.

Sadowy then added another late in the first period before recording his hat trick at the 9:38 mark of the second period. The Firebirds finally broke the scoring streak when an odd pass from Chatham to Caamano ended up in the Saginaw net.

The Spirit added two more goals in the second from Kirill Maksimov and Mike Davies, followed by Caamano getting his second of the night with less than two minutes left in the middle stanza.

Kris Bennett tallied Saginaw’s final goal and Bitten added one more for Flint with a nice move on the breakaway.

Flint now stands at 14-16-1-2 for 31 points and has moved back ahead of Saginaw in the standings to sit at fourth place in the West Division. If the season ended today, the Firebirds would qualify for the playoffs as the No. 8 seed in the Western Conference.