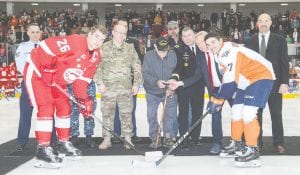 FLINT – In honor of Veteran’s Day, the Flint Firebirds of the Ontario Hockey League hosted Military Appreciation Day at the Dort Federal Event Center Saturday afternoon. All veterans received a free ticket to the game and many special events and auctions took place. The first 2,500 fans through the door received a free official team calendar poster, courtesy of The View Newspaper Group, Commercial Graphics, Northgate Packaging, DM Burr Group and Little Caesars. A silent auction of 10 player-autographed military themed Firebirds’ jerseys took place on the concourse throughout the game with all proceeds benefiting Blue Star Mothers of America, Inc. BSMA is a private nonprofit organization in the United States that provides support for mothers who have sons or daughters in active service in the U.S. Armed Forces.

A ceremonial puck drop featured Brigadier General, Michael A. Stone of the Michigan Army National Guard, along with local World War II veteran, 91 year old Jeriel Ponder of the U.S. Navy, flanked by Firebirds owner, Rolf Nilsen, Director of Hockey Operations, Costa Papista, and representatives of each of the four branches of the military.

Fans were treated to a live ‘swearing in’ ceremony on the ice during the first intermission, a Color Guard ceremony prior to puck drop, and an on-ice shoot-out during the second intermission between four of the local military service branch representatives. Military vehicles will be on display and a special Firebirds’ military t-shirt was on sale at the merchandise store.

The game, however, didn’t go as planned with Flint falling to the Sault Ste. Marie Greyhounds, 8-2.

The Hounds were ruthless from the beginning of the game, gaining a 2-0 after the first period with goals from Morgan Frost and Conor Timmins. Soo then upped the advantage to 5-0 after Brett Jacklin scored once and Mac Hollowell netted a pair.

Flint finally stopped the bleeding with a Max Kislinger goal late in the second, but the Soo rained on the parade when Calvin Martin scored just 11 seconds later.

The Hounds opened the third with a goal from Metamora native Jack Kopacka just 28 seconds in. Ryan Moore added Flint’s second of the night before Keeghan Howdeshell scored the game’s final tally for the Hounds.

Friday’sgame was even tougher to take when Flint made the jaunt to London and took a 9-0 shutout loss from the Knights. London scored early and often with first period tallies from Tyler Rollow and Robert Thomas. Richard Whitaker, Cliff Pu and Thomas all found the back of the net in the second for a 5-0 lead.

In the third, things got even worse. Coly Tymkin netted his second of the year, followed by Thomas completing the hat trick. Liam Foudy and Alex Formenton also registered goals.

With their ninth loss in a row, the Firebirds sit at 6-11-2-0 for 14 points, keeping them in last place in the West Division. Flint hosted Sarnia Wednesday, following press deadlines, and welcomes Erie on Saturday and Owen Sound on Sunday.