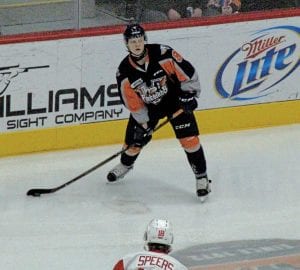 Flint’s Vili Saarijarvi looks to pass out of the defensive zone during Friday’s loss to Sault Ste. Marie.

FLINT – With playoff hopes dwindling, the Flint Firebirds hosted the Windsor Spitfires at the Dort Federal Event Center on Saturday, taking a 6-4 loss in front of 3,768 fans. Windsor got the scoring started earlier as Christian Fischer rippled the mesh just 1:33 into the game.

A few minutes later, Aaron Luchuk scored on the power play to make it a 2-0 game. That’s when the momentum began to flip, though, as Ryan Moore buried a one-timer just 28 seconds after falling behind by two. A few minutes later, Will Bitten tallied his 26th of the year to tie the game.

The final tally of the night was at 10:37 of the first period as Flint’s Zach Grzelewski fired one home, assisted by Hakon Nilsen.

At home against Sault Ste. Marie on Friday, the Firebirds took a 5-2 loss to the Greyhounds. Sault Ste. Marie got on the board at 5:14 of the first with a goal by Metamora native Jack Kopacka. Late in the period, the Hounds upped their lead when Morgan Frost found the back of the net.

Blake Speers then made it a three-goal game on the power play early in the second period before Flint finally responded with a Mathieu Henderson wrist shot at 18:51. The Firebirds got it back to within a goal early in the third with a tally from Grzelewski, but goals from Gustav Bouramman and Colton White sealed the win for the Soo.

The Firebirds still have a shot at the playoffs, but their hopes continue to get slimmer. Flint sits at 18-35-4-2 for 42 points with nine games remaining. They are 10 points out of the final playoff spot, behind the rival Saginaw Spirit. Flint will get a chance to gain some ground on Saginaw as they hosted the Spirit on Wednesday, following VIEW Newspaper Group deadlines. The Firebirds also welcome Kingston on Saturday and North Bay on Sunday.