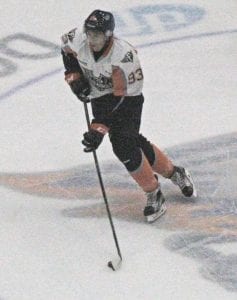 HAMILTON, Ont. – The Flint Firebirds were on quite a roll until this past weekend’s two-game road trip, which now has them on a two-game losing streak following Saturday night’s 3-2 shootout loss to the Hamilton Bulldogs.

The Firebirds fell into a hole quickly as the Bulldogs recorded a pair of opening period tallies. Trent Fox scored less than four minutes into the game while Luke Kutkevicius added another past the midway point of the period.

With only five seconds remaining in the opening frame, though, Nicholas Caamano cut the deficit in half on a strange goal that somehow found its way into the net on a wrist shot from the corner. That would be the last goal until Flint drew even in the third stanza.

Everett Clark drove in to attack the net, and after his shot was stopped, Jacob Collins scooped in the rebound for the equalizer, which would force overtime and eventually a shootout. Ryan Moore and Jalen Smereck would get the shootout opportunities for Flint, but couldn’t convert either attempt. Both Matthew Strome and Michael Cramarossa scored for Hamilton.

On Friday, the Firebirds dropped a 5-3 decision to the Oshawa Generals. In fact, they started the game on a high note. Clark would score a nice tick-tack goal in front of the net after a great set up from Mathieu Henderson and Ryan Moore.

Early in the second, Eric Henderson made it a deadlock once again before Flint took its second lead of the night. Smereck would pick the puck up between the faceoff circles and bury a wrist shot, his third goal of the season.

It didn’t take Oshawa long to get back to work though. Serron Noel tied it back up and then Kenny Huether gave Oshawa its first lead of the game. Kole Sherwood’s wrist shot early in the third would get Flint back even with the Generals, but goals from Anthony Cirelli and Jack Studnicka sealed the Firebirds’ fate.

In their inaugural season in the Ontario Hockey League, the Firebirds won the Coors Light I-75 Divide Cup, the traveling trophy awarded to the winner of the regular season series between Flint and the arch rival Saginaw Spirit. This year, the Firebirds already have a 2-0 lead in that series after taking a 5-3 win over Saginaw at the Dort Federal Event Center on Wednesday.

It was Saginaw, however, that struck first with a Mitchell Stephens goal just three minutes into the game. Midway through the period the Firebirds responded when Alex Peters skated between the faceoff circles and fired a wrist shot that found the back of the net.

Saginaw refused to go down easily, taking a 2-1 lead heading into the locker room after a goal from Hayden Hodges. It remained that way until late in the second period when Moore got the puck behind the net and sent a pass to the crease where Nicholas Caamano buried his 11th of the year.

That’s when Flint began to gain some momentum and took its first lead of the game a little over a minute later. Henderson scooped up a juicy rebound at the side of the crease and put it in to give the Firebirds a 3-2 edge heading into the third period.

Saginaw would answer just past the midway mark of the final stanza with a Kyle Bollers goal to tie the game. However, it would be all Flint from there. Just over a minute later, Fedor Gordeev fired a wrist shot from the side boards that ended up in the top-shelf for the eventual game-winning goal. Clark scored on an empty net to seal the win.

Connor Hicks was in net for the Firebirds, making 28 saves on 31 shots.

The back-to-back losses dropped the Firebirds back to fourth in the West Division and eighth in the Western Conference with a 13-10-0-2 mark for 28 points. Flint will now host the Niagara Ice Dogs on Friday and the Windsor Spitfires on Saturday before traveling to the London Knights on Sunday.