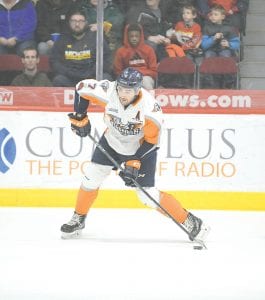 Flint’s Maurizio Colella winds up to fire a shot. Colella had a goal in Saturday’s loss.

BARRIE, Ont. – The Flint Firebirds had the lead twice but ended up on the wrong end of a 4-3 result at the Barrie Colts on Saturday.

In the second period Flint was in complete control. Maurizio Colella buried one and then CJ Clarke added another to give Flint the lead – two goals that were less than two minutes apart.

However, the third period was stolen away by the Colts with two goals by Sokolov to finish off his hat trick.

Flint was at the Sudbury Wolves on Friday in a 6-3 loss.

The Wolves attacked early and often, beginning with a three-goal opening frame. David Levin, Macauley Carson and Kirill Nizhnikov all notched goals for Sudbury. Clarke scored late in the period to make it 3-1 heading into the second.

Riley McCourt scored early in the second to get the Firebirds within one, but the Wolves broke into another three-goal stretch with two from Levin at the end of the second and one from Shane Bulitka in the third. Jake Durham added one for Flint, but it was too little, too late.

Flint sits in last place in the Western Conference at 16-32-3-2 for 37 points. It hosted Barrie on Wednesday, following press deadlines, welcomes Saginaw on Saturday and heads to Windsor on Sunday.