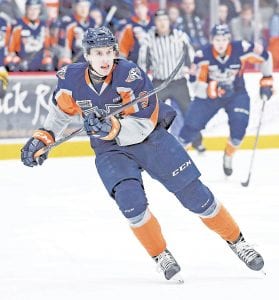 Flint’s Jack Phibbs pursues the puck during a game against the Sarnia Sting. Photo by Todd Boone/Flint Firebirds

BARRIE, Ont. – The Flint Firebirds finally got into the double digits in the win column with a 4-3 win at the Barrie Colts on Saturday after they exploded for a 4-0 lead early on.

Jack Wismer scored just 0:57 into the game and Hake Durham lit the lamp also for a 2-0 lead after one.

Hunter Holmes buried a power-play tally just 1:18 into the middle period, which was followed later in the frame by a power-play goal from Ethan Keppen. Flint took the 4-0 lead into the third.

All three Barrie goals came within the game’s final stanza, but it still fell one short of the equalizer.

It was a much different story in the 9-2 loss at the Sudbury Wolves on Friday. Sudbury tallied the game’s first four goals before Jacob Winterton put Flint on the board in the mid-second period. The Wolves extended their lead to 7-1 prior to Keppen netted the Firebirds’ second of the night. Sudbury added a late pair.

Flint was in a back-and-fourth tilt at the North Bay Battalion before losing 5-4 in overtime last Thursday. Keppen opened the scoring early, but North Bay answered not long after. Cody Morgan’s goal later in the period put the Firebirds up 2-1 heading into the first intermission.

The Battalion tied it only 0:49 into the period, but Wismer and Keppen erch scored in the final five minutes of the period to take a 4-2 edge into the third. Things changed quickly after that with North Bay scoring the only two goals of the final frame and the only one of the extra frame.

Flint is only two points away from getting out of the Ontario Hockey League’s basement at 10-41-4-0 for 24 points. They’re at Saginaw on Wednesday and host Oshawa on Friday and Owen Sound on Saturday.