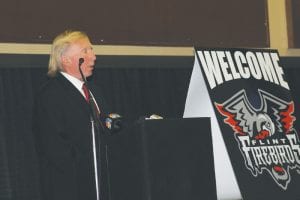 Flint Firebirds owner Rolf Nilsen made headlines when he fired, and then rehired, coach John Gruden and his entire staff.

FLINT – The Ontario Hockey League’s Flint Firebirds snapped a five-game losing streak on Friday in Sarnia before Flint beat the Generals for the first time ever topping Oshawa, 4-3, in a shootout. That, however, wasn’t the Firebirds top headline of the weekend as the entire coaching staff was fired and once they found out, all 24 players entered the front office throwing their jerseys on the floor and quit in a show of solidarity for their coaches.

“Last night, after our emotional shootout game against the Oshawa Generals, I made a decision with regard to our coaching staff, which was an irresponsible mistake,” said team owner Rolf Nilsen in a press release on Monday.

That mistake caught local, national and international attention within the hockey world, as well as athletic news as a whole. According to sources, following the win, Nilsen fired head coach John Gruden and his staff for not giving his son, defenseman Hakon Nilsen, enough playing time. Team President Costa Papista denied that was the reason in on-air interviews with local media Monday evening, but refused to site a reason for the firing.

“This morning, we took steps to immediately reinstate the coaches,” added Nilsen. “Today, the team’s senior leadership met with the players to apologize and have a very frank discussion about next steps leading to a resolution.”

What came after that was a media wildfire. Articles popped up all over the internet, from both out of state publications, as well as international media outlets.

“Ontario Hockey League Commissioner David Branch has been in Flint this afternoon and evening meeting with all parties involved,” Nilsen commented. “We are fully cooperating with this OHL investigation and we will look to their leadership to help us continue to grow as a team.”

Canadian outlet SportsNet reported on Monday that the players and coaches saw this coming. The report stated that coach Gruden sat the players down before Sunday’s dramatic come-frombehind win and informed them that the team’s owner, Nilsen, wanted more playing time for his son.

TSN, out of Canada, reported that Hakon was overheard on the phone with his father, Rolf. The details of that conversation, however, were not specified. They also reported that most of the Firebirds’ players called their agents asking for a trade.

Obviously, Hakon didn’t approve of the firing either. According to SportsNet, that night, the entire team stayed together at one of the player’s billet homes. It is unclear, though, if Hakon stayed with the team, or spent the night at his father’s home.

A surprise meeting at Flint Iceland Arenas between coaches, players, ownership and league officials apparently smoothed out the situation, resulting in the reinstatement of the entire coaching staff. It is presumed that all players will be back in action, at least for the time being, in Flint. A Tuesday meeting with players was set and jerseys were to be returned to the players.

Owner Nilsen realized the mistake that was made, and tried to reassure that the Firebirds are committed to bringing quality hockey to the entire Flint area.

“The Flint Firebirds’ management remains committed to providing the best hockey experience for our players, our fans and the Flint and Genesee County communities,” he concluded.

Prior to the controversy, Flint won two of the weekend’s three games to snap a five-game skid. The Firebirds topped the Sarnia Sting on the road on Friday, 3-2 in overtime.

On Saturday at home, Flint suffered a setback with a 5-3 loss to the OHL’s worst Guelph Storm. The Firebirds, though, rebounded on Sunday afternoon by topping the defending J. Ross Robertson Cup and Memorial Cup Champion Oshawa Generals, 4-3, in a shootout, after trailing 3-1 in the third period.

The Firebirds are now 7-9-0-1 for 15 points, putting them in last place in the West Division of the OHL’s Western Conference. Flint is scheduled to be back in action with two home games this weekend. Friday the Firebirds battle Sarnia before welcoming the Sault Ste. Marie Greyhounds on Saturday.