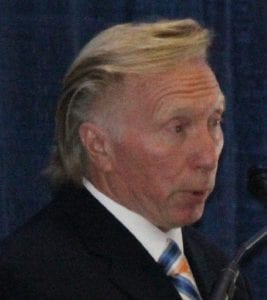 Flint Firebirds owner Rolf Nilsen has been suspended by the OHL.

FLINT — The controversy that surrounded the Flint Firebirds in November made international headlines and put the Ontario Hockey League on notice that team owner Rolf Nilsen may have been conducting team operations the wrong way in order to serve his own personal interests.

But when the coaches were re-hired and the players returned, the tension seemed to blow over. Or at least that’s how it appeared in the public forum. Behind the scenes, however, things continued to go awry. It built up until last Wednesday afternoon when Nilsen once again fired head coach John Gruden and assistant coach Dave Karpa. The allegation – in both situations – was that Nilsen fired the coaches due to the amount of playing time for his son, Hakon.

The argument has been made that the Firebirds’ lackluster record is what led to the firings. However, those close to the situation believe that a series of head-scratching trades earlier this year were made to intentionally tank Flint’s record so that the eventual firings would seem warranted.

The situation immediately started another international media uproar for over a day before OHL commissioner David Branch made a public statement Thursday suspending owner Rolf Nilsen, as well as newly appointed interim coach Sergei Kharin, for the remainder of the season.

On Thursday morning, an 11 a.m. pre-game skate was scheduled to take place, but the only player to show up for the non-mandatory skate was Hakon Nilsen. Branch came to Flint and began the league’s internal investigation, interviewing the Firebirds’ players. There was debate, though, on whether or not Thursday’s home game against the Erie Otters would actually take place.

In the early afternoon, the team made it known that the game would be played, which instantly brought up questions of who would be behind the bench for Flint. At the last minute, the league appointed Joe Stefan, current Firebirds assistant general manager, and Pat Peake, former assistant of the Plymouth Whalers, to come in and coach the team for the time being, allowing all of the elements to be in place for the game to go on as scheduled.

Flint came out the gate strong, and continued to compete hard throughout the game, but suffered a 5-2 loss to the league’s best team. The situation obviously didn’t set well with the Firebirds’ fans as the game produced what was easily Flint’s smallest crowd of the season. The team announced an attendance figure of 1,929, but to the naked eye, it appeared to be more in the ballpark of 1,000. The Dort Federal Credit Union Event Center seats over 4,000 for hockey games.

After the game, Hakon made his first media appearance in front of probably 25-30 different media outlets.

“I’m just trying to work hard and earn the respect of my teammates and that’s what my main goal is,” said Nilsen. “They haven’t been an issue at all. They’ve been really good to me and really positive and a few of the guys have reached out to me.”

As far as the situation with his father goes, Hakon seemed to give a more upbeat perspective than what was expected.

“I talked to him this morning. Everything seems to be fine,” Nilsen added. “He’s not disappointed at all. He took this as a positive interaction. Hopefully the team can move forward. Obviously (the OHL) had to step in. It’s the second time this has happened. I think it’s very professional.”

He then went on to describe his relationship with former coach Gruden.

“It had its ups and downs but I can’t really say too much. I think he’s a good coach, but stuff happens. He got fired. We went on a 15-game losing streak, so you can’t go on a losing streak like that and expect nothing to happen.”

Then, the obvious question came up about his ice time being a factor in the firings.

“This time it actually was not, at all,” he said before having to back track a bit after media members asked him to elaborate. “Actually both times. The main problem was not my ice time, but obviously it’s the easier story. It’s a lot of details (behind the real reasoning). I really cannot get into that right now.”

Most recently, Flint overcame a three-goal deficit to win 4-3 at Sarnia on Friday before taking a 4-0 loss to London at home on Saturday.

The Firebirds’ final game of the season is March 19.