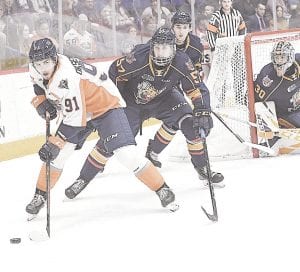 Flint’s Evgeniy Oksentyuk was the first to light the lamp in Sunday’s 5-3 win at Oshawa. Photo by Todd Boone/Flint Firebirds

OSHAWA, Ont. – The Flint Firebirds’ franchise-record winning steak continues to be extended as Birds won their 10th game in a row with a 5-3 victory at the Oshawa Generals on Sunday.

Flint got started early with Evgeniy Oksentyuk’s goal just 1:12 into the game. Vladislav Kolyachonok doubled the advantage later in the period.

The Firebirds owned the second period with two goals coming from Tyler Tucker, the first coming on a power play.

The Generals stormed back in the third, though, scoring three straight goals, but Oksentyuk put it in the empty net to close it out.

Flint also snagged a 7-3 come-back victory at the Hamilton Bulldogs on Saturday.

Ty Dellandrea gave Flint the initial lead, but Hamilton scored three times in the alter half of the opening frame.

Then the Firebirds turned up the heat, beginning with a Quinn Yule goal early in the second. Riley Piercey tied things up on the power play to make it 3-3 heading into the third.

Jack Wismer wasted no time getting the lead, scoring just 0:51 into the third. Brennan Othmann added his 13th of the year before Wismer’s pair in the final three minutes completed his hat trick.

Flint also won 5-4 in overtime at the Erie Otters on Friday.

Erie scored early in the first, just 0:16, but Cody Morgan answered back to tie it heading into the intermission.

The Otters took the lead back, but yet again, the Firebirds answered. This time with an Othmann goal, once again taking a deadlock into the break.

Kolyachonok’s goal in the third gave Flint the lead and Dellandrea doubled the lead with a short-handed goal moments later. However, Erie scored twice to send the game to overtime.

Connor Roberts put an end to the extra period in just 0:28, burying the game-winner.

The Firebirds have now moved up to fourth in the Western Conference at 32-17-1-1 for 66 points. They’ll be at Saginaw on Friday and are at home to face Guelph on Saturday.