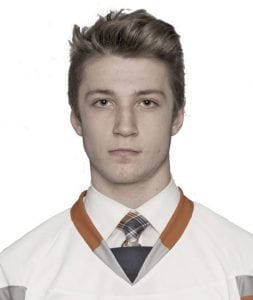 FLINT – Although things typically slow down in the offseason, especially following the Ontario Hockey League Draft, the Flint Firebirds still have some things going on to help prepare them for the upcoming season. On May 31, they made the first step in doing just that.

He’s 6-foot-1, 197 pounds and averaged more than a point-per-game during the 2017 OHL Cup, scoring three goals with eight assists and a plus-seven rating in just eight games.

“We’re extremely happy that Ethan has committed to our program,” said Firebirds General Manager Barclay Branch in a press release. “He is a tremendous hockey player and an outstanding person that will be a big part of our nucleus moving forward. On the ice, he fits the power-forward type mold. He possesses good size, is a strong skater and can make good things happen both with the puck in a skill sense and without the puck in a physical sense.”

Although it won’t be involving next season, departing defenseman, Alex Peters and the only captain in Flint Firebirds’ history, was recently awared the Mickey Renaud Captain’s Trophy.

“I am very honoured to receive the Mickey Renaud Captain’s Trophy,” said Peters. “It is a prestigious award, with special meaning named in memory of a great person. I would like to thank the Firebirds’ coaching staff and my fellow teammates for believing in me as captain, because the way I see it, we had a room full of leaders that all stepped up when they needed to. I would also like to say thank you to the Renaud family for giving us an example like Mickey to try to live up to.”

There was also the recent release of the 2017-18 OHL regular season schedule, which much to fans pleasure includes 16 Saturday night home games for the Firebirds. Flint will be on the road for their first two games of the regular season, at Kitchener on Sept. 22 and Owen Sound on Sept. 23. However, they return home on Sept. 30 for the home opener against the Ottawa 67’s.