Firebirds get back on track with OT thriller 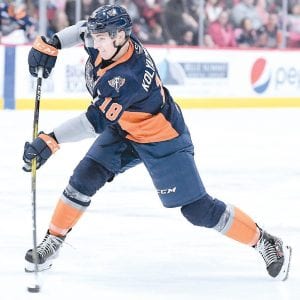 Flint’s Vladislav Kolyachonok scored the game-winning goal in overtime on Saturday against the Windsor Spitfires. Photo by Todd Boone/Flint Firebirds

FLINT — It took an extra frame, but the Flint Firebirds got the job done in a 4-3 overtime victory over the Windsor Spitfires at the Dort Federal Event Center on Saturday.

Windsor stamped the only goal of the opening frame, but Flint turned things around in the second period.

Braeden Kressler got the Firebirds on the board late in the second period, and with only 12 seconds remaining in the stanza, Cody Morgan netted his 15th goal of the night for a 2-1 lead at the intermission.

The Spitfires reversed the momentum in the third, scoring twice in the first 12:54 to take the lead back. However, Evgeniy Oksentyuk recorded the equalizer moments later, eventually forcing overtime.

That’s when Vladislav Kolyachonok’s time came. His game-winning goal at 2:52 of the extra frame sent the Firebirds to yet another victory.

Flint is 40-20-1-1 for 82 points, placing it fourth in the Western Conference. The Firebirds will be at Sault Ste. Marie on Wednesday, at London on Friday and host Erie on Saturday.