Firebirds get dramatic win prior to holiday break 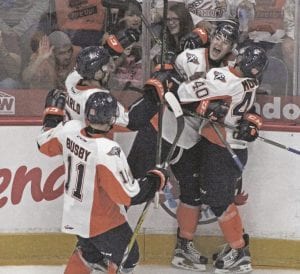 The Flint Firebirds celebrate after scoring a goal against Saginaw.

SARNIA, Ont. – It took some extra time, but the Flint Firebirds were able to get the job done last Thursday, taking a 3-2 overtime victory at the Sarnia Sting to head into the holiday vacation with some momentum.

It was a bit of a grind throughout the game as Ryan McGregor gave the Sting a 1-0 lead just 2:37 into the game. The Firebirds responded quickly when Mathieu Henderson made a backhanded pass to Ryan Moore, who then buried a wrist shot to draw even less than two minutes after Sarnia’s goal. A couple of minutes after that, Flint would get its first lead.

Moore would get an assist to go with that goal after he sent the puck toward the crease and Kole Sherwood tipped it for the Flint lead. All three goals happened in the first 6:01 of the opening period.

The only goal of the second period was scored by Sarnia’s Jordan Kyrou at 6:36 to tie the game 2-2 and the score would remain the same throughout regulation, forcing overtime. Sherwood skated into the zone and took a shot that dribbled its way past the goaltender to clinch the win.

Last Wednesday in Saginaw, the Firebirds dropped a 3-1 decision to the Spirit. Saginaw scored just 2:01 into the game on a DJ Busdeker goal. Sherwood was able to even the score late in the period, scooping up a rebound and putting it home. That, however, would be the last time Flint found the back of the net on the night.

Marcus Crawford scored for Saginaw in the second period and Hayden Hodgson scored an empty net goal in the third.

Flint is now 16-15-0-2 for 34 points, remaining in fourth place in the West Division and eighth place in the Western Conference. The Firebirds are now on a holiday break and will not return to the ice until Dec. 28 at home against Sault Ste. Marie.