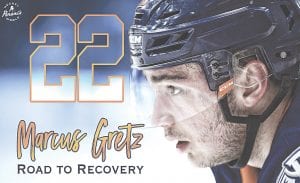 FLINT — A shoulder injury may have cut his year short this past season, but the Flint Firebirds’ Marcus Gretz is rehabbed and ready to go. Although, during a recent feature story in a Firebirds’ press release, he spoke of how difficult his injury was.

“When I got hurt, it was probably the worst time of my life,” said Gretz. “I think the thing that really set in is that we weren’t doing well as a team. Some people may look at that as an excuse because I’m hurt and that means I don’t have to play but for me it was killing.”

Now that he has rehabilitated his injury, Gretz is currently on a strict routine, dedicating himself to honing his game and making sure his shoulder has healed properly.

“My daily routine during the summer is I usually wake up around 7 a.m. I eat breakfast, take a shower, get ready for the day and at eight o’clock I head to the gym,” Gretz continued. “At nine o’clock I get my workout going and it’s usually from 9-11 and then from 11o’clock on I usually grab another bite to eat and then head to my skate. Which is from 12:30 to sometimes 2:45, and then based off that, I have physical therapy for the rest of the day.

“After physical therapy, I’m usually free and I try to get away from the game a bit.”

When it came to the shoulder, Gretz seemed fine and eager to get the season started.

“At this point, my shoulder’s feeling unbelievable and it’s just little tweaks from here on out.”

The Firebirds return to game action beginning with the preseason on Aug. 31 at the Guelph Storm. They then travel to the Windsor Spitfires on Sept. 11 and then are at the Saginaw Spirit on Sept. 13. Flint wraps up the preseason slate with a game against Saginaw at Iceland Arena.