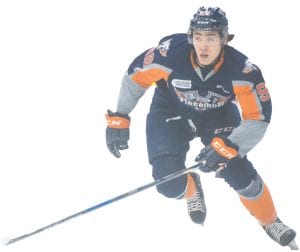 FLINT – The Flint Firebirds have become one of the more-improved teams in the Ontario Hockey League (OHL) from last season to this.

But the Firebirds will face a formidable foe in the Soo Greyhounds in the first round of the OHL playoffs.

Games one and two of the best-ofseven, opening-round playoff series are slated for Sault Ste. Marie on Thursday and Saturday of this week. The series then shifts to Flint for Games three and four on Monday, March 27 and Wednesday, March 29.

Architect of the rebuild has been first-year general manager George Burnett, who brought his winning ways of 20 prior OHL seasons to Flint and made several key trades.

Forward Kole Sherwood, obtained from the London Knights, finished second on the Firebirds in scoring with 33 goals, 52 assists, 85 points.

Forward Maurizio Colella, brought in from the North Bay Battalion at the January trade deadline, scored 12 goals, 12 assists, 24 points in 30 games after joining the Firebirds.

Both goalies are the products of player exchanges made by Burnett this season with Connor Hicks arriving from the Hamilton Bulldogs and Garrett Forrest picked up from North Bay.

But the Firebirds are much more than the players brought in by Burnett.

And overage defensemen Mathieu Henderson and Alex Peters made their second season in Flint productive ones. Henderson was fourth on the team in scoring with 10 goals, 44 assists, 54 points while captain Peters chipped in with 10-25-35 totals.

Flint did split the six regular-season games with the Soo. Ironically, the visiting team won all six games.

Oulahen and assistant coaches Eric Wellwood and Scott MacDonald used the final few games of the regular season — after the Firebirds had clinched a playoff spot — to prepare for the dance.

“We didn’t worry about winning as we tried to use the games to work on our fundamentals and practice our systems while playing top teams like Owen Sound, Windsor and London.

“Having said that, it’s going to be a tough task for us playing a team like the Greyhounds who are well-coached and have three unbelievable lines. But we have a good group that plays well together. We need to try to stay even-keeled and trust the process,” Oulahen relayed.

The Soo, which won a league-high 26 road games, are a dangerous team with seven players who scored between 20 and 40 goals.

Between the pipes, the Soo can choose between rookie sensation Matthew Villalta and veteran Joseph Raaymakers.

Randy Russon is the editor of HockeyNewsNorth.com. He began in the media business 42 years ago in 1975, and has been covering the Ontario Hockey League since. He was even at the 1985 OHL Draft when the Sudbury Wolves took a skinny, long-haired defenseman by name of Costa Papista in the sixth round.