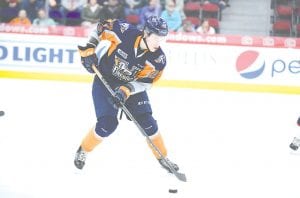 Flint’s Riley McCourt lugs the puck into the offensive zone.

FLINT – The Flint Firebirds’ two wins in a row made for an exciting weekend, most recently in a 3-2 overtime victory over the Sudbury Wolves at the Dort Federal Event Center on Saturday.

Sudbury was the first to attack with Owen Gilhula scoring just three minutes in. Moments later, Fedor Gordeev evened things up for the Firebirds with a goal that went in right as he crashed into the net.

Early in the second period, Flint jumped on top. Ty Dellandrea skated in on a breakaway and pulled a nice forehand-to-backhand move for his 25th goal of the season.

Drake Pilon got the equalizer for Sudbury in the third, forcing overtime. With a couple of minutes left in the extra frame, Maurizio Colella stole the puck, faked out the goalie and buried it into the top shelf to clinch the win.

Friday at the Guelph Storm, Flint jumped out to a huge lead, letting it slip through its fingers in regulation, but ended up getting the job done in a 6-5 overtime win.

The Firebirds exploded out of the gate taking a 3-0 lead just 7:28 into the game with goals from Colella, Jake Durham and Dellandrea.

Guelph finally got on the board in the final minute of the opening frame with a Keegan Stevenson goal. The second period also belonged to the Firebirds with early goals from Ethan Keppen and CJ Clarke ballooning the lead to 5-1 heading into the third.

However, that period was all Guelph’s. Isaac Ratcliffe’s goal four minutes in opened the floodgates and the Storm jumped all over Flint. Mason Primeau then added one and Ratcliffe scored two more, completing a hat trick in one period, forcing overtime.

Flint didn’t seem to happy to lose a four-goal lead and quickly put an end to it in overtime with Jalen Smereck’s 10th goal of the season.

The Firebirds are 10th in the Western Conference at 18-39-3-2 for 41 points. They were at the Erie Otters tonight after deadline, they’re at the Niagara IceDogs on Thursday and host the London Knights on Saturday.