Firebirds heating up in final stretch for playoffs 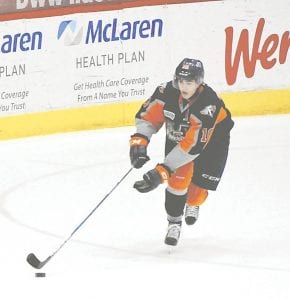 SAGINAW – The Flint Firebirds are peaking at the right time of the regular season as they push for the Ontario Hockey League postseason, most recently laying down a convincing victory on the road against the Saginaw Spirit on Sunday, 4-1. With the win, the Firebirds clinched the Coors Light I-75 Divide Cup for the second consecutive season.

Early in the game, Ryan Moore found himself in the right spot at the right time. Kole Sherwood fired a shot on net and the rebound came right to Moore who quickly buried it for the 1-0 edge. Late in the opening stanza, Nicholas Caamano’s pass back to Sherwood caught the Saginaw defense on its heels as Sherwood scored easily into an open net.

Cole Coskey would stop the bleeding for Saginaw less than a minute into the middle stanza to cut the lead in half, but Sherwood would respond very quickly to give Flint a two-goal lead once again. A strange deflection sent the puck into the air near Sherwood. He caught it, sat it down on the ice and ripped it over the goalie’s shoulder.

On the final goal of the game, the puck bounced off the boards behind the net and came right to Maurizio Colella, who quickly scooped the rebound into the net. Connor Hicks made 22 saves between the pipes.

On Saturday at the Dort Federal Event Center, the results weren’t quite what Flint had hoped for in a 6-3 loss to the Sarnia Sting. The Sting got the scoring going less than three minutes into the game on a Jeff King goal, but just 18 seconds after that, Flint responded.

Ty Dellandrea connected on a wrist shot from the top of the faceoff circle to draw the game even. Late in the period, Jaden Lindo took the lead back for Sarnia, which Flint answered once again. Mathieu Henderson skated into the slot, faked a pass and ripped a snap shot past the goaltender to equalize the game again.

Less than two minutes into the second period, Adam Ruzicka put Sarnia back on top again with a goal at 1:44, and once again the Firebirds had an answer. Caamano received a pass from Moore in the slot and scored with ease to tie it 3-3. That, however, would be Flint’s final response.

Kevin Spinozzi added one more in the second for Sarnia before Drake Rymsha and Ruzicka each scored in the third to ice it away.

The result was the exact opposite of what happened in Flint on Friday when the Firebirds earned a 6-3 win over the North Bay Battalion. Just 1:49 into the game, Henderson’s shot from the point was deflected into the net by Colella for the 1-0 lead. Later in the period, Everett Clark was awarded a penalty shot and beat the goalie with a wrist shot to the blocker side.

North Bay would cut the lead back down to one after an Adam Thilander goal before Caamano skated in from the side of the net and made a nice move to put Flint up 3-1 after one. Early in the second, Alex Peters fired a shot from the blue line and the rebound bounced into the slot, where Michal Steinocher ripped it and recorded his first career OHL goal.

Andy Baker would add another for North Bay, which Jake Durham answered by scoring on an unbelievable spinning backhand shot behind the net, which deflected off the back of the goaltender and into the net. Kyle Potts registered a North Bay tally early in the final frame before Durham got the game’s final goal by sending it into the empty net.

Hicks made 41 saves in the win.

Flint traveled to Guelph last Monday for a matinee game and thumping the Storm for a 5-1 victory to give Flint an extra two points and put them three above Sarnia for seventh place in the Western Conference.

The rookies really got it going for the Firebirds early when Jalen Smereck’s slap shot was deflected in by Dellandrea 6:47 into the game. Moments later Moore skated in and set Sherwood up for a one-timer, but the goaltender made the save. However, he couldn’t swallow it and was way out of position and Dennis Busby fired it in to an open net.

Later in the period, Luke Kirwan shot it on net and the save was made, but the puck was deflected into the air and Hunter Holmes batted it into the net with his stick to give Flint a 3-0 lead heading into the first intermission.

Early in the second period, a pair of nice passes from Colella and Ryan Littlejohn near the crease set up Moore for a gaping net and a 4-0 Flint lead. Toward the end of the frame, Sherwood had a clear path to the goaltender and passed it at the last second to Colella at the far post, who buried it to extend the advantage to five.

Nick Deakin-Poot would put one in for Guelph in the third period, but Flint’s offensive onslaught in the first two stanzas was too much for Guelph to overcome. Garrett Forrest was solid between the pipes with 29 saves.

The successful run has helped Flint gain traction in the playoff race as it currently sits in seventh in the Western Conference with a mark of 30-24-1-4 for 65 points, three ahead of Sarnia and three behind Kitchener. Flint was at Sarnia on Wednesday, following deadlines, and hosts Sudbury on Friday and Oshawa on Saturday.