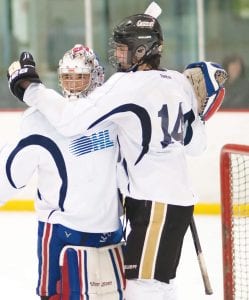 Flint Firebird Brenden Rons (14) congratulates one of three goalies during the Blue and White scrimmage on Sunday.

FLINT — Former Plymouth Whalers and newly-acquired draft picks from the Ontario Hockey League Priority Selection descended upon Flint Iceland Arena this past weekend, giving the coaching staff a better look at the talent that is available to them. The three-day mini camp consisted of 30 players.

It all began on Friday night with a 5 p.m. practice session and then carried over into Saturday with a goalie session at 3 p.m. and another practice at 4 p.m. The event concluded on Sunday at 10:30 a.m. with the Blue & White Scrimmage to see the players in simulated game action.

Not only did the players get to hit the ice, but they and their parents were able to gain some familiarity with Flint and Genesee County as they toured Perani Arena, Grand Blanc High School, University of Michigan-Flint, Mott Community College and several other key locations. Players are expected to be into their billet homes by August in time for the start of the season, and classes at either Grand Blanc High or Mott or U-M Flint colleges.

It has not yet been announced who may have made or not made the team. — B.P.