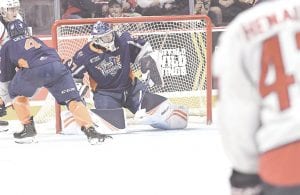 Flint’s Luke Cavallin makes a save during a battle with the Windsor Spitfires. Photo by Todd Boone

FLINT — The Flint Firebirds’ best start in franchise history hit a bit of a snag this past weekend, most recently with a 5-1 loss to the Barrie Colts at the Dort Federal Event Center on Saturday.

Things went south quickly, as Barrie scored an eye-popping four goals in the first 9:04 of the game.

Jack Phibbs got Flint on the board less than two minutes later, but the damage had already been done. No one else would score until the Colts added an insurance marker in the third.

The Firebirds lost a high-scoring affair 7-5 at the Sarnia Sting on Friday.

Sarnia notched the first goal just 0:32 into the contest, but Dennis Busby answered with a power-play goal at 4:29. The Sting took the lead back with less than five minutes left in the opening frame.

Flint battled back with an Evgeniy Oksentyuk tally 4:20 into the middle stanza, but a pair of Sarnia goals gave the Sting a 4-2 lead late in the period. However, Jack Wismer got the Firebirds right back into it, scoring with only five seconds left in the frame.

Flint then tied it at four early in the third thanks to an Ethan Keppen tally. Sarnia then took the lead again, and once again, the Firebirds answered with a shorthanded goal by Connor Roberts.

It just wasn’t meant to be for Flint, though, as Sarnia netted a pair in the final two minutes.

Flint still looks good in the standings at 10-5-0-0 for 20 points, good enough for third place in the Western Conference. The Firebirds will now host the Mississauga Steelheads on Friday and the Sault Ste. Marie Greyhounds on Saturday.