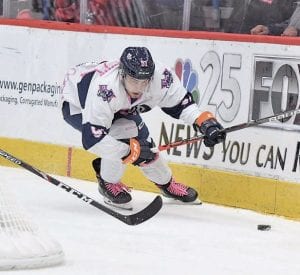 Flint’s Evgeniy Oksentyuk (91) floats below the boards to sneak in and grab the puck. Photo Todd Boone/Flint Firebirds

FLINT – The Flint Firebirds won their thirdstraight home game in a 6-2 triumph over the visiting Peterborough Petes in front of more than 3,100 fans on the club’s fifth-annual ‘Pink Out Night’ last Saturday.

Dennis Busby (Arizona Coyotes), Brennan Othmann and Cody Morgan each had a two-point game to lead the ‘Birds. Firebirds’ captain Ty Dellandrea (Dallas Stars) extended his point streak (3G, 4A) to four games. Anthony Popovich made 26 saves on 28 shots for his fourth win in five starts between the pipes. Flint improved to 5-2- 0-0 on the season, a new franchise-best start. The Petes were led by rearguard Declan Chisholm (Winnipeg Jets), who also had a goal and an assist.

Final shots on goal were 37 – 28 in favor of the home team. The Petes finished one-for-two with the man-advantage, and the Firebirds were unable to convert on three power-play chances.

Next up for Flint is two consecutive away games in Windsor on Thursday and in Kitchener Friday night. The ‘Birds return home Saturday to host the North Bay Battalion on First Responders Appreciation Night, sponsored by Dort Federal Credit Union. Between the two games, fans will have an opportunity to tour police vehicles, fire trucks, and ambulances. All police, fire & EMS employees can receive a complimentary ticket.

“We are thrilled to announce the addition of Owen to our hockey club. Owen is a talented veteran presence that brings with him championship experience and is a talented and high character person. Owen will play a key role with our hockey club moving forward,” said Flint Firebirds Vice President of Hockey Operations & General Manager Barclay Branch. “We would like to thank Michael for his contributions while in Flint and wish him much success in his future endeavors.”