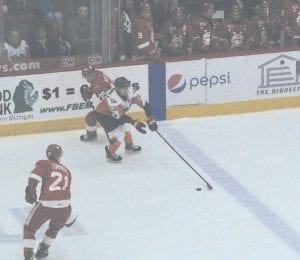 Flint’s Ty Dellandrea keeps the puck from crossing the blue line in the offensive zone.

OWEN SOUND, Ont. – A weekend road trip wasn’t what the Flint Firebirds had hoped for when they left town, but they were within one goal in each game. Most recently was a 5-4 loss at the Owen Sound Attack Saturday night.

Flint fell into a hole quickly, as the Attack picked up first-period goals from Maksim Sushko, Aidan Dudas and Daylon Groulx. Maurizio Colella cut into the deficit early in the second for Flint’s first goal of the night, but it was quickly answered by Jonah Gadjovich to put Owen Sound up 4-1.

The momentum quickly changed in the third period as Jake Durham scored less than a minute into the frame and then CJ Clarke cut the deficit to one. The rally was complete after Jacob Collins fired home his second goal of the season to tie the game midway through the period.

The victory would not be completed though, as Matthew Struthers registered the game-winner for the Attack.

Friday’s game at the Kitchener Rangers was also a 5-4 loss, but the Firebirds earned a point in the standings after forcing overtime. Both teams created a wild opening period with Kitchener quickly going up 2-0 on goals from Riley Damiani and Adam Liska.

Then just like that, Flint caught fire, beginning with Jalen Smereck’s second of the year. Ty Dellandrea added another to tie the game and Nikita Alexandrov’s first of the season put the Firebirds on top 3-2 after the first.

Nick McHugh tied it back up for Kitchener in the second, but Ryan Littlejohn’s goal later in the frame gave the lead back to Flint. The Firebirds remained up by a goal until less than two minutes left in the game when Greg Meireles’ tally evened it up and forced overtime. That’s when Adam Mascherin found the back of the net to take the win for Kitchener.

The Firebirds remain in fifth place in the West Division and 10th in the Western Conference at 9-18-3-0 for 21 points. They head to Sault Ste. Marie today, following press deadlines, and host Saginaw on Friday before going to Sarnia on Saturday.